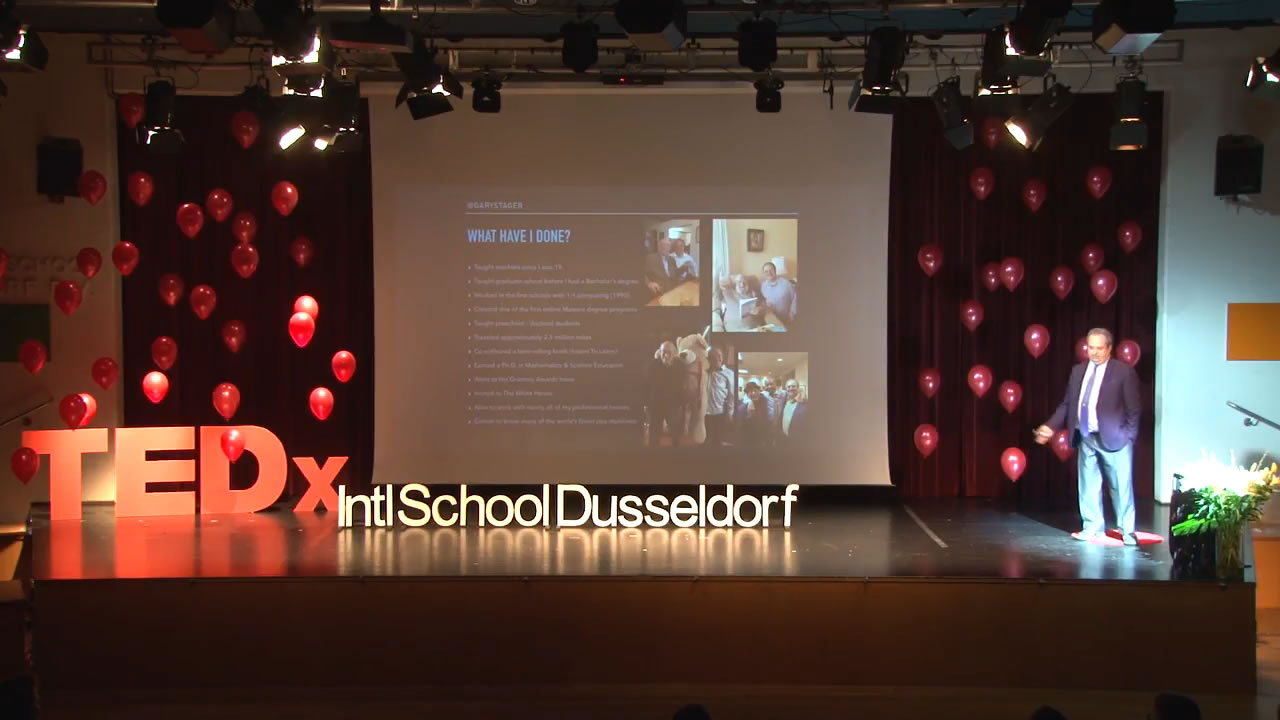 With all of the problems in the world, I know what you’ve been thinking. “I sure wish there was a new Gary Stager TED Talk to watch.” Well, your prayers to Judge Roy Moore have been answered.

Last Spring, I was headed to Germany to be in-residence at a school where my great friend, colleague, and former student, Amy Dugré, is part of the leadership team. A few weeks before my residency, I received a lovely email from tenth grade students at the International School of Dusseldorf. The letter acknowledged my forthcoming work at the school and kindly invited me to participate in a TEDx event they were organizing. The theme of the TEDx event was identity under the banner of “Who Am I?”

I told the kids that I despise all things TED and especially loathe delivering TED talks(1), but if they wanted me to participate, I would be happy to stand on the red dot and pretend to be an aspiring viral video star. Given the maturity expressed in the invitation, I hoped that my candor would lead the kids to consider reasons why some might not share their enthusiasm for TED.

In the end, the tenth graders’ charm won me over and I accepted their kind invitation.  When asked for the topic of my performance, my inner smartass kicked into gear and I came up with the title, “Care Less.”

In an attempt to further mock the pomposity of TED, I supplied the following abstract.

Any success I may have experienced is attributable to overcoming obstacles needlessly set by others and learning early on that many of the things other care deeply about, simply do not matter at all. This awesome TED talk will explore my epic quest to triumph in a world of needless prerequisites, arbitrary hierarchies, and hegemonic pathways. Caring less about the sort of compliance and schooling traditions imposed on young people may lead them to focus on finding things that bring them joy, beauty, purpose, and authentic achievement.

It is often the case that the germ of my best ideas are borne of wisecracks and this topic was no exception. Spending time in highly competitive private schools where folks too readily accept bourgeois notions of what educational preparation for the “real world” truly means leaves me convinced that I chose the right topic.

The very nature of this terrific student organized event required the TED Talks to be self-indulgent. That makes sharing my talk slightly uncomfortable. I took seriously the opportunity to speak directly to high school students who I hoped would benefit from an adult offering a different narrative from so many of their teachers and parents. I only wish I had the opportunity to give the talk more than once, but that’s the problem with TED Talks. TED is a TV show without any of the benefits of a television studio or taking the show on the road.

I wrote the talk an hour before showtime and delivered it with no monitor or timer in front of me. I’m sure that the performance suffers, but that the message may manage to be worthwhile nonetheless. I hope you or some teenagers find it interesting.

In the final analysis, I’m enormously proud of what I said. I just can’t bear to watch a second of it.

(1) Remarkably, I have now delivered four completely different TED Talks. I spent months before my first TEDx Talk (Reform™) obsessing over the high-stakes chance to go viral and become famous beyond my wildest dreams. The experience made me ill. I then decided I needed to confront my fears and asked to try it again a year later. That time, I spent virtually no time preparing and convinced myself that I didn’t give a damn (We Know What To Do). The audio at the venue was problematic, but the TED experience was less soul crushing. Just when I thought TED Talks were behind me, I was invited to give a third TEDx talk at the American School of Bombay. I have worked at the school since 2004 and felt obligated to oblige. By then, I had abandoned any hope of being a YouTube sensation or being knighted by the Queen and decided to share the legacy of my friend, mentor, and hero, Seymour Papert. People seem to appreciate that talk, Seymour Papert – Inventor of Everything*.