In August 2018, I delivered the opening keynote address at the Constructionism Conference in Vilnius, Lithuania. When invited to speak at the conference nearly eighteen months earlier, I felt pressured to share the topic of my address quickly. Since I do some of my best work as a wiseass, I offered the title, “Making Constructionism Great Again.” Over the ensuing months, my tongue-in-cheek title began resonating and formed the basis for what I believe to be one of my favorite keynotes ever. (Sadly, I will unlikely ever give the presentation again. Therefore, I will not have the opportunity to improve upon my performance)

Despite the title I selected, I accepted the sober challenge of making an important contribution to the conference. After all, this is a community I care about, a topic I have dedicated my adult life to, in the home of my ancestors. Due to a family emergency, the speaker scheduled before me had to fly home and my talk got moved earlier in the schedule at the last minute. That meant that some of the people I hoped would hear my message, missed it. I rarely write a speech with specific audience members in mind, but I did in this case.

A bit of background

The Constructionism Conference is held every two years, almost always in Europe. The conference prior to Vilnius was in Thailand, but that was the only time the conference was outside of Europe. For close to three decades, the conference was called, EuroLogo, and was a biennial event celebrating the use of the Logo programming language in education. In 2008, the long-time organizers of the conference worried that interest in Logo was waning and that shifting the emphasis to constructionism (1) would broaden the appeal and attract more participants. It has not. Communities begin to die when they become self-conscious. There is nothing wrong with “preaching to the converted.” There are quite successful institutions that preach to the converted. Its members find strength, nourishment, and purpose in gathering.

In my humble opinion, the problem lies within the fact that the European Logo community, and this is a generalization, focused more narrowly on the fascinating mathematical or computational aspects of the Logo programming language separate and apart from its more radical use as an instrument of school reform, social justice, and epistemology. Logo’s father and inventor of “constructionism,” Dr. Seymour Papert was a noted mathematician and computer scientist who did invent the first programming language for children, but limiting the enormity of his vision to that would be like one of his favorite parables about the blind men and the elephant.

To me, the Constructionism/EuroLogo community has been focused on what is measurable and earns academic credit for those seeking job security in university systems proud of their ongoing medieval traditions. Although I have great friends who I love, respect, and adore within this somewhat dysfunctional family, I am never sure what they make of the loud American kid who works with thousands of teachers each year and doesn’t give a damn about publishing journal articles read by 3.1415927 people.

I go to the Constructionism Conference every two years because it is important to sustain the community and ideally to help it mature. If it became more popular or influential along the way, that would be a bonus. This speech was intended as a bit of unsolicited tough love, but love nonetheless. In fact, love is a big theme in this address. That is one of the most important lessons I learned from Seymour Papert and this Constructionism Conference was the first since his death.

I hope you will watch

Thankfully, I grabbed the SD card out of the video camera sitting in the theatre pointed at the stage following the talk so there is a video documenting a talk I am proud of and wish I could give many more times. The audio quality isn’t perfect and there is no camera work (except for a couple of quick edits I made). That said, if you want to understand who I am and why I do what I do, I hope you will watch this video. It was quite an emotional experience.

If you wish to listen to it while deep sea folk dancing, please WATCH from about the 46 minute mark. You need to see, hear, and feel what great teaching and learning look like. 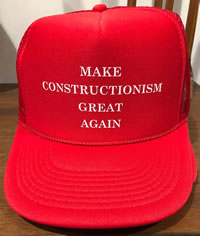