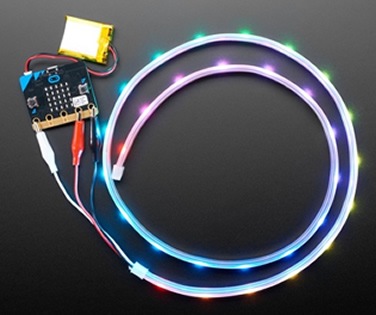 a messing-about primer to get you started

NeoPixels are tiny, programmable, color-changing, LEDs manufactured by AdaFruit. NeoPixels make cool additions to micro:bit projects since they require little power, can be addressed individually or in groups, and can change color. They are especially popular in wearable projects and for creating interactive eTextiles.

Best of all, there are NeoPixels extension blocks available in Microsoft MakeCode. Although MakeCode makes programming the micro:bit easy, there is too little documentation about how to control the NeoPixels.

Connecting the NeoPixels to the micro:bit

Adding the NeoPixel extensions to MakeCode

There should now be a new set of NeoPixel blocks in the MakeCode toolbox. These blocks will save with your project, but you will need to add them again for other projects.

Once the NeoPixel extensions are installed, you may begin programming them with blocks specifically designed to control the LEDs. The first thing you need to do is tell MakeCode about your attached NeoPixel. This is initializing the environment (setting it up).

Now, MakeCode will initialize the NeoPixel device whenever the program runs.

Note: If you connect more than one NeoPixel, MakeCode will automatically generate set blocks like the one above, but will name them strip2, strip3, etc… You also have the ability to rename the strips.

You might also wish to put some indication that a new program is downloaded to the micro:bit. I like to display an icon in the on start block. When troubleshooting, I change the icon.

You can make a rainbow

Show rainbow from 1 to 360 lights each pixel with a different color of the rainbow.

Remember to specify how many LEDs are in your NeoPixel device.

When you ask the NeoPixels to do something specific, like shift, rotate, or light a range of LEDs, you need to force the technology to show the strip with the strip show block in order to make the changes visible.

A slight variation to try

In this next program, we use the acceleration value (found in the Input tools) to send the pixels in one direction or the opposite when the micro:bit is tilted left or right.

You may use the set pixel color at block (found in the … section of the NeoPixel blocks in the toolbox). This block allows you to specify the color of a specific pixel. Remember to use the show block to display the changes.

Imagine a 12 light NeoPixel ring. The following program turns it into a push button wreath.

In this program, we want to define a range or region of LEDs in the NeoPixel as a variable in order to change that entire range at once.

Set range and its siblings takes two inputs – the LED position where you wish to begin and how many LEDs should be included in that range. For example, if I have a 12 LED NeoPixel that I wish to divide, I might try a program like the following.

What does this program do?

Be sure to share your MakeCode projects online so others can learn from them!