Note: The following text appears in a slightly edited form in Pamela Livingston’s book, 1-to-1 Learning, Second Edition: Laptop Programs That Work. It’s amazing how much better a piece of writing becomes when you edit it post-publication. (Apologies to Ms. Livingston)

I intend for the publication of this article to signal a renewed commitment to writing new articles about 1:1 computing while also making seminal articles on the topic available in the near future.

When I led professional development activities in the world’s first two “laptop schools” back in 1990, the most unusual variable was not that 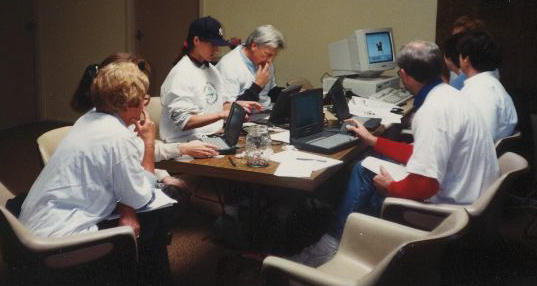 fifth through seventh graders each had their own truly personal computer when neither I nor any of my colleagues did. The most unique characteristic of these two schools and dozens of others that followed was the way in which those laptops were used. Although it seems like prehistoric times, there were drill and practice programs, “educational” games, collaborative online projects and productivity packages widely available even before the first Gulf War and a few years before the existence of the World Wide Web.

Despite this range of seemingly easier options, the original “laptop schools” embraced computer programming, particularly Seymour Papert’s LogoWriter and its accompanying constructionist philosophy. The schools chose to do something hard with their laptops – something Papert might call, “hard fun.” Then as now, this approach stands in stark contrast to those who embrace computers as productivity enhancers, test score improvers or back-of-the-classroom amusements. 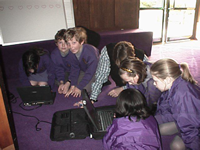 The laptop would serve as an incubator for powerful ideas – an intellectual laboratory and vehicle for self-expression. Since the personal laptop, as expressed by Alan Kay’s 1968 plans for a Dynabook, was itself inspired by observing young children program in Logo, countless schools around the world embraced Logo and its potential. Large international conferences were held. Books were written and millions of copies of Logo were installed. I embraced the Logo philosophy, led hundreds of teacher workshops and even edited a journal dedicated to its implementation. However, at Australia’s Methodist Ladies College in Melbourne and the Coombabah State School in Queensland, something demonstrably different was underway.

I remember returning home from Australia in the early nineties and presenting projects programmed by children in LogoWriter to audiences at educational technology conferences in the United States. One of my heroes, a fantastic longtime Logo-using teacher looked at the projects on display and remarked, “Oh! That’s what it looks like when the kids have time.” The work of children in laptop schools possessed a level of sophistication unparalleled then or today.

Since the early 1980s, many of us believed in the intellectual and creative abilities of students that would be amplified by Logo programming, but

such goals often remained elusive where there just were not enough computers or time available to realize our aspirations. Students with their own personal laptop computer could now spend the time necessary for the task at hand. Each success would inspire project elaboration or the testing of a larger hypothesis. Errors in thinking or execution required complex debugging strategies.

While the laptop inspired previously reluctant students to become passionate learners perhaps interested in schoolwork for the first time, kids were able to integrate the skills and techniques taught them into personally meaningful projects. Such projects frequently outpaced the imagination of the curriculum or a teacher’s standard expectations. This was not only tolerated, but also embraced as the catalyst for wholesale school reform and innovation.

Not only had the early “laptop schools” invested in computers, they did so in order to disrupt the status quo in a deliberate fashion. MLC Principal David Loader quoted Holt, Dewey and Papert in memos to parents, essentially saying, “We love your children and the tuition that you send us, but frankly our school isn’t good enough.” This was quite a bold statement to share with the community, especially when one of the first two “laptop” schools was a private school dependent on parental investment. Their decision to “go laptop” passed a 27-member board by one vote and cost each parent thousands of dollars for a laptop at a time when few adults owned one.

Loader and his pioneering colleagues were ready to learn from the laptop experience and make whatever changes in schooling that the experience required. The implementation of laptops was never referred to as a pilot, project, initiative or experiment. There was an expectation that the provision of personal portable mobile multimedia computers for every student would pay educational dividends in excess of their cost and disrupt traditional pedagogical practices.

Attitudes towards class size changed overnight when 15-30 projects needed to be supported in every class. Within a year, English, History, Geography and Religious Education teachers demanded a three-hour humanities block during which all of the subjects could be integrated via a project approach. Forms of assessment and the curriculum changed. Students working on a humanities project had to engage in sophisticated mathematical thinking and computer science while their teachers observed the need to blur the artificial boundaries between subject areas, plus learned the value of collaboration with peers and students.

Countless professional development opportunities were created. Even architectural plans needed to be revised since students were now mobile in ways never before anticipated. Teachers who were required to pay roughly 25% of the cost of their own laptop, requested that vendors come to school to demonstrate the $5,000 laser printers some purchased with their own funds for use at home. Teachers read books about educational theory and discussed the nature of teaching and learning informally over lunch.

Older teachers nearing retirement, yet confident in their ability, spearheaded the use of laptops and LogoWriter. These veterans were trusted and

admired by younger colleagues with neither the technical or pedagogical expertise to innovate on their own. Average teachers wrote papers in order to present at conferences and enrolled in graduate school. The status of teachers was elevated where it mattered most – in the heads and hearts of the teachers themselves.

Today, dozens of teachers from the original “laptop schools” are school principals, professors, and corporate presidents around the globe. Expecting a professional to use professional tools enhances their self-image and improves their sense of professionalism!

The early “laptop schools” invested in a wide range of sophisticated professional development strategies that could provide and sustain momentum. Traditional workshops were available in addition to opportunities for school visits and post-graduate study. Veteran teachers were relieved of some teaching duties so they could mentor colleagues in their own classrooms.

Schools employed me sometimes for months at a time, to do whatever I deemed appropriate for improving the quality of the school and I had complete access to principals eager to consider my recommendations. Such willingness to learn, lead and support serendipity has sadly diminished with each passing year. However, in the early nineties I was able to convince multiple schools that the only way their teachers could teach in new ways was for them to learn in new ways. So, on numerous occasions I took dozens of teachers away for what became known as “slumber parties” during which they would learn to learn with computers in exactly the ways we hoped their students would learn – with the same software and personally meaningful project-approach.

If a teacher wished to learn computer mechanics or how to use a particular productivity tool, they could enroll in the school’s community education program, free-of-charge. Such learning opportunities were always on a teacher’s own time and outside of school-based professional development focused on learning. Many teachers apprenticed with me in computer camps offered during school vacations. This benefitted kids and working parents in addition to creating an informal, yet powerful professional development vehicle for a steady supply of teachers.

Successful school leaders sustained progress by continuing to innovate while ever mindful of the need to remind their employees and community to keep on pushing. The best school leaders create rituals to honor and preserve worthy efforts while challenging others to continue growing.

Does Easy Do It?
Today, I speak at many 1:1 events and participate in panel discussions where a colleague will reflexively alert the audience that, “This is hard.” Such warnings seem a precondition before implementing laptops or even accepting the inevitability if 1:1 computing. It has never been a matter of if, but of when.

Our deliberations too often descend into adolescent debates over whether laptops can go home or how many white boards to purchase (my answer = none) or how we will keep kids off the Internet; all the while focusing on the constraints rather than on the affordances of this protean device. The laptop not only helps kids learn what we have always wanted them to know, but allows them to know things that were impossible to know and to do things unimaginable just a few years ago. Sadly, as the technology has become cheaper and more ubiquitous, its use in schools has become more cautious and pedestrian. I rarely encounter the learning renaissance or explosion of classroom creativity I experienced pre-1996. This is not an indictment of the technology, but of schools and a failure of leadership. It is not the technology that has failed, but our imagination and willingness to engage in reflective practice.

Perhaps it is too hard to use laptops in transformative ways in the NCLB era when public schools are being shamed and oppressed by standardized testing while independent schools embrace such draconian practices as a vulgar marketing tool. It seems easier to pretend that the world has not changed or that understanding computer science is irrelevant to nearly every walk of life. Our schools increasingly adopt technology policies that treat teachers and students like imbeciles and felons.

Maybe, it’s all just too hard!

In retrospect, asking parents to spend $3,000 in 1990 per student laptop seems hard. Asking teachers to learn to program computers and teach students to do the same seems hard. Requiring teachers to spend their own money to help purchase a laptop while asking them to challenge all of their basic assumptions and beliefs about the nature of teaching and learning seems hard. Expecting principals to lead, inspire progress and make dramatic change palatable to the community seems difficult.

The crazy thing is that I don’t remember any of the work I did in “laptop schools” as being hard. The work was so exhilarating and the benefits of collaborating with joyful learners and curious eager energized teachers was so rewarding that it all seemed effortless. Easy as pie!

That’s right, setting the stage for the tens of thousands of schools around the world who have since considered or embraced 1:1 computer was easy! Convincing parents to buy their child a laptop was easy. Teaching thousands of children and their teachers to program on floppy-based laptops with monochromatic displays and a megabyte of RAM was easy. Creating productive contexts in which innovation and progress would continue in my absence was easy because the adults saw with their own eyes how children are competent and deserve the richest range of intellectual and creative opportunities imaginable.

Now, if I can just convince a few more adults and policy-makers how easy it really is to change the world! 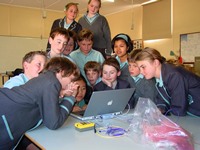 3 thoughts on “Hard and Easy: Reflections on my ancient history in 1:1 computing”