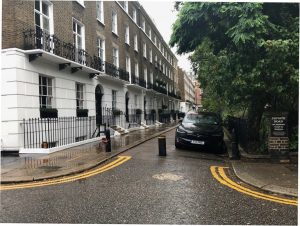 While on one of the fabulous London Walks tours (I’ve done dozens of them) of Chelsea in London last year, I learned that before houses had street numbers assigned to them, people shared cards with a rendering of their home’s fanlight depicted on it. This practice dates back to 1720.

The function of the fanlight is to light a home’s entry way, but many of London’s upscale townhouses feature a semicircle shaped fanlight in which a geometric pattern exists. Each pattern needs to be different, at least in a particular neighborhood, in order to depict the occupants of the home for deliveries and visitors. Below are some of the photos of fanlights I took while walking around Chelsea.

This is a good project for employing the concept of state transparency; in programming as in life, it is a good idea to return to where you started. Returning the turtle to its initial starting position and orientation allows you to repeat the pattern elsewhere on the screen and perform various transformations on it.

Two-Day Seminars with Will Richardson in October 2019 in DC, NJ, & Boston – Register today!

Perhaps My Favorite Keynote Ever

Proud of My Alma Mater