Last year, my friends at Intel invited me to participate in a breakfast summit at the Museum of Contemporary Art overlooking the Sydney Opera House. The other invited guests seated around the table represented captains of industry, distinguished academics, and leaders of assorted acronyms. We each had 2-3 minutes to solve the problems with school, 21st Century skills, S.T.E.M, S.T.E.A.M. girls and technology, economic development, Coding in the classroom, teacher education, and a host of other challenges that normally require 5-6 minutes of breathless rhetoric or clever slogans.

I had the luxury of speaking last. I began by saying, “The first thing we need to do is find a cure for amnesia.” Those armed with “solutions” or prescriptions for “reforming” education do not lack for chutzpah. A sense of perspective and awareness of history are their greatest deficits.

I once heard President Clinton tell the National School Boards Association, “Every problem in education has been solved somewhere before.” We do indeed stand on the shoulders of giants, but Silicon Valley smart-alecks and the politicians they employ behave as if “history begins with me.”

During the Intel breakfast I pointed out a few historic facts:

The other day, President Obama announced $4 billion dollars available to teach computer science/coding and mathematics (now that’s a novel idea) for the vulgar purpose of creating “job-ready” students. Never mind the fact that there remains no consensus on what computer science is or how such lofty goals will be achieved, especially by a lame duck President. If history is any guide and if the promised funds are ever appropriated, this seemingly large investment will disappear into the pockets of charlatans, hucksters, and a proliferation of “non-profits” each suckling on the government teat. (See eRate)

To make matters worse, one of our nation’s leading experts on computer science education reports that the national effort to design a K-12 Computer Science Framework has is focused on consensus.

“The goal is to create a framework that most people can agree on.  “Coherence” (i.e., “community buy-in”) was the top quality of a framework in Michael Lach’s advice to the CS Ed community (that I described here). As Cameron Wilson put it in his Facebook post about the effort, “the K-12 CS Framework is an effort to unite the community in describing what computer science every K-12 student should learn.”  It’s about uniting the community.  That’s the whole reason this process is happening.  The states want to know that they’re teaching things that are worthwhile.  Teacher certificates will get defined only what the definers know what the teachers have to teach. The curriculum developers want to know what they should be developing for.  A common framework means that you get economies of scale (e.g., a curriculum that matches the framework can be used in lots of places).

…That’s the nature of frameworks.  It’s about consensus, not about vision. [emphasis mine]  That’s not a bad thing, but we should know it for what it is. We can use frameworks to build momentum, infrastructure, and community. We can’t let frameworks limit our vision of what computing education should be.  As soon as we’re done with one set of frameworks and standards, we should start on the next ones, in order to move the community to a new set of norms. Guzdial, M. (2016) Developing a Framework to Define K-12 CS Ed: It’s about consensus not vision.

That’s right, mountains of money and human capital will be expended to determine the status quo. Consultants will be enriched while school children are treated to “coding” curricula so good that you don’t even need a computer! Powerful ideas are viewed as distractions and vision may be addressed at indeterminate date in the future.

“The future must be dreamed, desired, loved, created. It must be plucked from the soul of the present generations with all the gold gathered in the past, with all the vehement yearning to create the great works of individuals and nations.” – Omar Dengo

From Melbourne to Massachusetts to the UK, large scale state and national edicts to teach “coding” or “computer science” K-12 has resulted in laundry lists of unrelated nonsense, full of “off-computer” programming activities, keyboarding instruction, file saving, posture lessons, digital citizenship, identification of algorithms, counting in binary, bit, byte, and vocabulary acquisition. In more than one jurisdiction, the computer science curricula is touted as “not even needing a computer!”

There is no talk about changing schooling to accommodate powerful ideas or even add programming to the mathematics curriculum as my Wayne, NJ public schools did forty years ago. Instead, we’re renaming things and chanting slogans.

Frequent readers of my work might be surprised that I only include one mention of Seymour Papert in this article. Instead, I end with the words of another old friend of mine, Arthur Luehrmann. Arthur coined the term computer literacy. After three decades of his term being segregated to justify the most pedestrian of computer use (Google Apps, IWBs, online testing, looking up answers to questions you don’t care about, etc…), it is worth remembering what he meant when he invented the term, computer literacy. The following is from a 1984 book chapter, Computer Literacy: The What, Why, and How.

“A few years ago there was a lot of confusion about what computer literacy meant. Some people were arguing that a person could become computer literate merely by reading books or watching movies or hear- ing lectures about computers. That viewpoint probably came out of a time when computer equipment was expensive and, therefore, not often found in classrooms. Teachers had to teach something, so they taught “facts” about computers: their history, social impact, effect on jobs, and so forth. But such topics are more properly called “computer awareness,” I believe.

Even the fact that a school or district possesses one or more com- puters must not be taken as evidence that education in computer literacy is taking place. Many schools use computers for attendance and grade reporting, for example. These administrative uses may improve the cost- effectiveness of school operations, but they teach children nothing at all about computers.

Other schools may be using computers solely to run programs that drill their students on math facts, spelling, or grammar. In this kind of use, often called Computer-Assisted Instruction, or CAI, the computer prints questions on the display screen, and the student responds by typing answers on the keyboard. Except for rudimentary typing skills and when to press the RETURN key, the student doesn’t learn how to do anything with the computer, though. Here again, a mere count of computers doesn’t tell anything about what students may be learning.

A third kind of use comes closer to providing computer literacy, but it too falls short. In this mode, the computer, together with one or more programs, is used to provide some kind of illumination of material in a regular, noncomputer course. A social studies teacher, for example, might use The Oregon Trail simulation program to illustrate the difficul- ties pioneers encountered in trekking across the American West. Such an application not only teaches American history, it also shows students that computers can be made to simulate things and events—a powerful notion. Yet neither in this, nor in any of the other educational uses of the computer I have mentioned so far, does a student actually learn to take control of the computer.

Literacy in English or any language means the ability to read and write: that is, to do something with the language. It is not enough to know that any language is composed of words, or to know about the pervasive role of language in society. Language awareness is not enough. Similarly, “literacy” in mathematics suggests the ability to add numbers, to solve equations, and so on: that is, to do something with mathematics. It is not enough to know that numbers are written as sets of digits, or to know that there are vocational and career advantages for people who can do things with mathematics.

Computer literacy must mean the ability to do something constructive with a computer, and not merely a general awareness offacts one is told about computers. A computer literate person can read and write a computer program, can select and operate software written by others, and knows from personal experience the possibilities and limitations of the computer.”

At least educational policy is consistent, we continuously invent that which already exists, each time with diminished expectations.

Thirty two years after Luhrmann published the words above – longer than the lifespan of many current teachers and our national goal is to create job-ready coders? Off! We should be ashamed.

This is undoubtedly a first-draft written during a conference overseas. 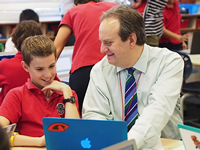 Dignity for Chickens, Yes! Humans? Not so much!