This is probably my favorite week of the year. Tuesday I’ll be reporting from MacWorld in San Francisco and then I fly to New York to spend the rest of the week at the International Association of Jazz Educators Conference (IAJE).

Both events amplify the ingenuity, creativity and improvisation that America presents to the world. As a twenty-one year Macintosh owner, MacWorld is like Christmas. Steve Jobs excites the faithful with announcements of exciting new products and then I spend the rest of the day wandering the exhibit hall looking for gadgets I can’t possible live without. In past years I’ve found products I can’t live without, including Delicious Monster Library, PDFPen, ProSoft Engineering’s lifesaving data backup and recovery utilities, my indispensable Boombag (luggage with a mixer, amplifier and speakers in the case) and a bunch of MIDI instruments I promise to use someday. I’ve learned my lesson and will not run six blocks to the San Francisco Apple Store to purchase the (rumored) new iLife ’07 and iWork ’07 software. The store employees tend to be surly and know nothing about what was just announced at MacWorld. Worst of all, they may not have inventory.

Apple is hinting at major announcements to coincide with their thirtieth anniversary. So stay tuned… 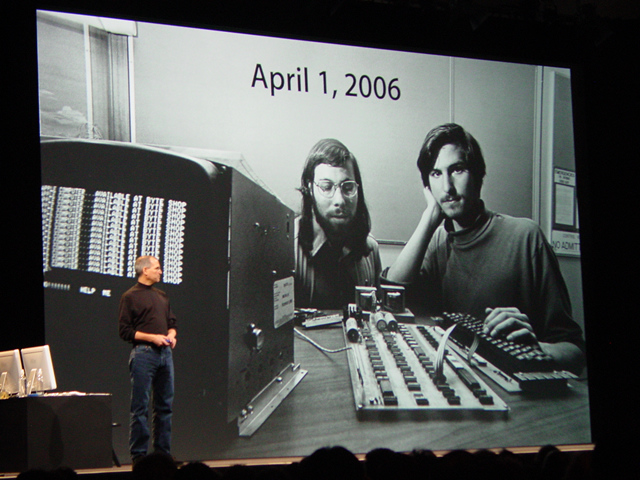 I “plan” to blog from the Steve Jobs keynote Tuesday morning (10 AM Pacific). Check back here to learn about the exciting new products announced at MacWorld. Rumors suggest that the Apple phone, iTV media device and new iWork & iLife software will be announced this week. Many of these products have implications for K-12 education. I’ll let you know about the coolest stuff I see on the show floor as well.

Steve Jobs’ evangelical performance is just a warm-up for four days of world-class concerts and master classes by many of the world’s finest jazz musicians at the IAJE Conference. The conference program features sessions from 9 AM with the last session starting at 1 AM!

Colleagues from 10 – 80
Dozens and dozens of professional musicians donate their time to perform at IAJE, often as guest soloists with student ensembles from around the world. Educators and students are able to learn from and with their musical heroes in both formal and informal settings. Imagine a conference where more than 3,000 of educators, artists and children learn together with no discussions of standardized testing or how their principal is a jerk.

One of the highlights of IAJE is the annual Jazz Masters Award presented by the National Endowment for the Arts. A gala concert features great performances and vignettes highlighting the contributions to culture made by seven artists. Dozens of past recipients representing the living history of American music attend to welcome the new inductees. It’s a rare treat to witness the camaraderie displayed among the living legends.

As the band began to play I noticed something extraordinary. A little kid, actually 10 years-old with a trumpet in-hand was struggling to climb up on the stage. Jon Faddis looked down at this kid standing next to him and asked, “Are you a jazz master?” The kid replied, “What key is this in?”

Faddis shook his head and continued leading the big band. Once Paquito D’Rivera finished his solo, Faddis gestured towards the little boy since in the jazz community you are expected to play if you have the
audacity to be on the bandstand. The child began to improvise on chord changes and the crowd went wild. After playing too many choruses, Faddis jokingly grabbed his trumpet and yelled, “Go to bed!”

The “other” jazz masters soloed and the performance culminated in a standing ovation. 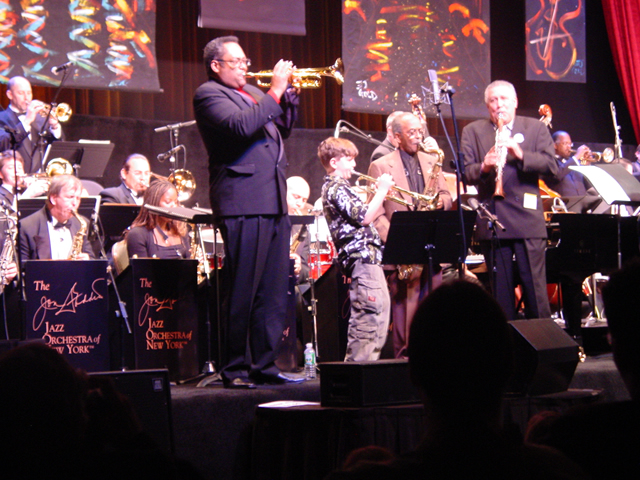 You can tell by the photos below how delighted the professional musicians were to share the bandstand with the fourth grader. He was not playing at being a musician. He was a musician participating in the
community of practice unencumbered by grade levels, standardized curriculum or assessment schemes. The boy was evaluated based on his ability to perform.

I could not imagine having the courage to perform in front of Tony Bennett, Nancy Wilson, Roy Haynes and Freddie Hubbard, but this young musician sensed that he was welcome on stage with his new colleagues.

Jazz musicians, like many other artists, give their time generously and share their gifts because they care about the continuum of culture. They are passionate about the arts continuing to flourish after their playing days are through. One look at saxophonist Jimmy Heath, eight times the age of the young trumpet player by his side, and you remember what learning and teaching are all about.

Originally published, January 8, 2007 in The Pulse Education’s Place for Debate