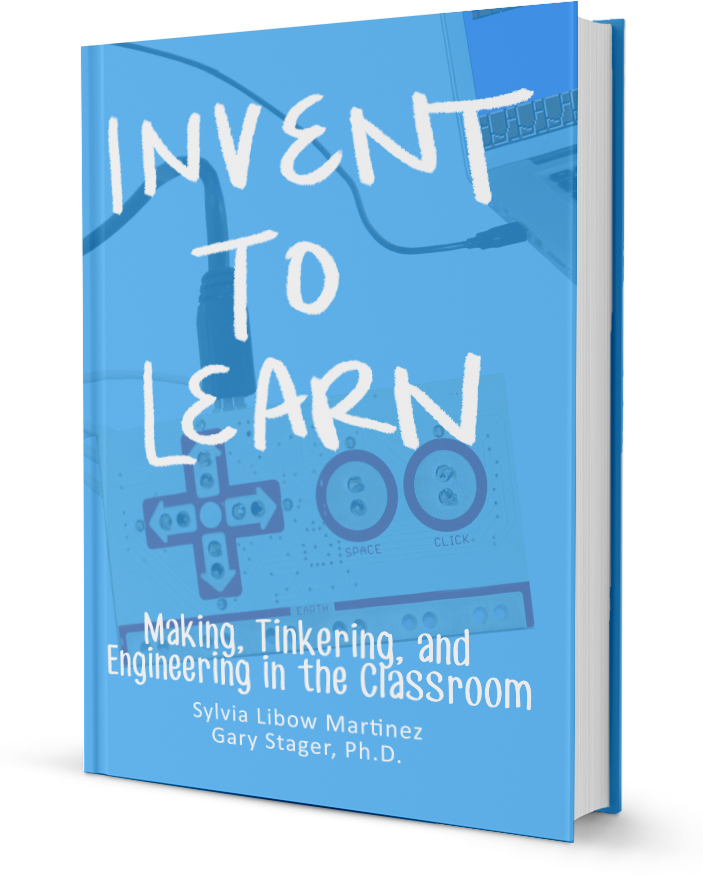 My latest book, “Invent To Learn – Making, Tinkering, and Engineering in the Classroom.”

Gary was the new media producer for The Brian Lynch/Eddie Palmieri Project – Simpatíco, 2007 Grammy Award Winner for Best Latin Jazz Album of the Year. Dr. Stager is also a contributor to The Huffington Post and a Senior S.T.E.M. and Education Consultant to leading school architecture firm, Fielding Nair International. Gary also works with teachers and students as the Special Assistant to The Head of School for Innovation at the Willows Community School in Culver City, California.

Dr. Stager’s best-selling book, Invent To Learn – Making, Tinkering, and Engineering in the Classroom was published in May 2013 by Constructing Modern Knowledge Press.

Gary Stager has authored hundreds of articles, scholarly papers, and book chapters over three decades. Here is a selection of those publications.

Choosing Hope Over Fear from the 2004 Chicago Education Festival

(foreword) The Invent To Learn Guide to 3D Printing in the Classroom: Recipes for Success by David Thornburg, Norma Thornburg, and Sara Armstrong. 2014

(coauthor) Invent To Learn – Making, Tinkering, and Engineering in the Classroom(with Sylvia Martinez) 2013

(contributor) The Muses Go to School: Inspiring Stories About the Importance of Arts in Education by Herbert R. Kohl and Tom Oppenheim 2012

(contributor) The Case for Computing  A chapter from the book, Snapshots! Educational Insights from the Thornburg Center (2004)

Computers for Kids, Not Schools (1993) from the book, Reflections of a Learning Community – Views on the Introduction of Laptops at MLC.

“The Best Makerspace is Between Your Ears” published by the National School Boards Association. (June 2015)

Outside the Skinner Box: Can Educational Technology Make a Course Correction? from the Winter 2015 issue of Indepentend School Magazine.

Constructionism 2014 Paper (Vienna, Austria) August 19-23, 2014.
This is Our Moment (with video of plenary presentation)

Scholastic Administrator magazine (2014)
What’s the Maker Movement and Why Should I Care?

Technology is not Neutral (2013)
Education Week

Scholastic Administrator magazine (2013)
For the Love of Laptops

An important monograph written in 1996
Computing and the Internet in Schools: An International Perspective on Developments and Directions

2003 Proceedings of the 3.1 and 3.3 working groups conference on International federation for information processing: ICT and the teacher of the future – Volume 23 (Melbourne, Australia)
Online Constructionism and the Future of Teacher Education  co-authored with Terrence Cannings

Girls and Technology: Overcoming Myths and Malpractice (2002)
Thoughts presented as a keynote address at a Melbourne, Australia conference on girls and technology.

Computationally-Rich Constructionism and At-risk Learners (2001)
A paper presented at the 2001 World Conference on Computers in Education. Copenhagen, Denmark.

Kids with Laptops – The Antidote to Educational Computing (1997)
A Commentary by Gary S. Stager written in 1997 for Computelec Australia.

My 1:1 Toolbox (2011)
Creativity software I recommend for student laptops.

Sites of kids mentioned during keynotes:

Passport to The Best Educational Ideas in the World (2010)

Wanna Be a School Reformer? You Better Do Your Homework First (recommended books)

The five TED Talks I would share with children

The 1996 Whitepaper by Gary Stager mentioned during his presentation.

My manifesto for excellent teachers and principals

Computing and the Internet in Schools: An International Perspective on Developments and Directions
From the archives, a monograph written by Gary S. Stager, Ph.D. in 1996

Why Thomas Friedman Does Not Compute
Gary’s critical review of The World is Flat and the education community’s knee-jerk reaction to it.
Published in the December 2005 issue of District Administration

A Schoolmaster of the Great City: A Progressive Education Pioneer’s Vision for Urban Schools (book from 1917) by Angelo Patri

Gary Stager’s role in the history of classroom-based “laptop learning” is documented in the book, Never Mind the Laptops: Kids, Computers and the Transformation of Learning, by Bob Johnstone.

Books Discussed in Some Presentations

June 30th “Ask Me Anything” with Gary Stager

Scientifically Based Research: 120 repetitions in NCLB by Ken Goodman (2007)