I go back a long way with Generation YES, I used to read Dennis Harper‘s articles in The International Logo Exchange journal back in the 1980s before he contributed articles when I became Editor of Logo Exchange in the early 1990s. He brought microcomputers to schools in dozens of developing countries, had taught all over the world and was one of the earliest promoters of microcomputers in education

While Dennis was leaving his last school district position and transitioning the successful Federal Challenge Grant, Generation WHY, into a company, Generation YES, I suggested that he hire my partner Sylvia Martinez to help make the trains run on time. Sylvia is now the President of Generation YES.

Since that time I have worked on various projects with Generation YES, including a science and technology improvement project in Brooklyn, NY and as one of the designers of TechYES, the ground-breaking peer-to-peer technology literacy certification program. 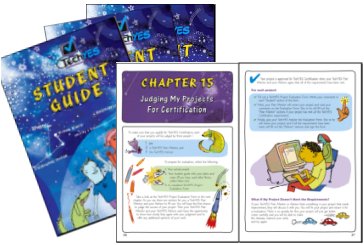 While giant testing companies sell multiple-choice tests challenging students to identify the parts of a computer – cassette drive, floppy disk, dot-matrix printer – as a way to satisfy the NCLB 8th grade tech literacy requirement and ISTE standards, TechYES starts from the premise that children are competent and can demonstrate their technological fluency through the creation of personallly meaningful projects that impress their peer mentors.

There are very few companies outside of the members of The Contructivist Consortium committed to student empowerment, creativity, collaboration and computing. It is much easier to sell products that do things to students, rather than amplify their voice and  potential. Generation YES is the rare exception.

I recently found a VHS tape about Generation WHY that includes a stunning appearance by my friend, colleague and mentor Dr. Seymour Papert, saying some very flattering things about what is now known as Generation YES and their educational approach to 21st Century student empowerment, leadership and service.

The short video clip below is well worth watching. You might even take a look at Generation YES and TechYES.

Incidentally, the host of the 1998 video (below) is now serving in the Peace Corps in Africa.

Seymour Papert on Generation YES and Kid Power from Gary Stager on Vimeo.