I’ve been waiting for months to be able to share this news with you. About 18 months ago I was asked to be in a film about creativity, math, science, engineering and imagination. So I shaved my mustache for the first time since I was eleven and headed down to the “shoot” at a Jetsons-influenced building adjacent to The California Science Center.

The new documentary film, imagine it!² The Power of Imagination. is about connecting imagination and creativity with science and engineering in education. The 52-minute film inspires people to imagine a better world, unleash their creativity and take action to solve global challenges.

I am in august company for my film debut. Other experts interviewed in imagine it!² The Power of Imagination, include:

One lesson I learned was not to shave for the first time in 34 years if the film is being shot in HD. The other is that I need a wicked cool British accent like Sir Ken Robinson. He gets an exponentially greater amount of face-time than this humble blogger. He can really rock that accent.

Despite Sir Ken bogarting the film, some of my outtakes are on the Web for you to cherish for years to come. 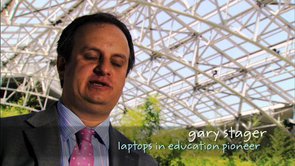 If you can’t get enough of Stager on screen, check out the video from when I rocked NECC this past July!

Gift Ideas for You and Colleagues (it’s not too late)