I’m thrilled to announce that our publishing company, Constructing Modern Knowledge Press, has released a new and expanded second edition of our book, Invent to Learn: Making, Tinkering, and Engineering in the Classroom. The new book is available in softcover, hardcover, and Kindle editions.

Sylvia Martinez and I are enormously proud of how Invent To Learn has inspired educators around the world since we published the first edition. Our decision to emphasize powerful ideas over technology ensured that very little of the book became dated. In fact, the first edition of  Invent to Learn continues to sell at the age of 129 (in tech book years) and is available or currently being translated into seven languages. The book is quite likely the most cited book about the maker movement and education in scholarship and conference proposals.

The new book takes a fresh shot at addressing the three game changers: digital fabrication, physical computing, and computer programming. We include sections on the BBC micro:bit, Hummingbird Robotics, littleBits, and new programming environments for learners. The new Invent to Learn also afforded us with an opportunity to reflect upon our work with educators around the world since the dawn of the maker movement in schools. There is an enormous collection of updated resources and a new introduction. Stay tuned for more online resources to be posted at the Invent To Learn web site.

In crass terms, the new edition of Invent to Learn: Making, Tinkering, and Engineering in the Classroom is 25% longer than the original. We even debugged some six year old typos.

I was shocked by how much time and effort was required to create the new edition of Invent to Learn. The second edition actually took longer to write than the original. I think we made a good book even better.

According to Amazon.com, the most underlined passage in Invent to Learn is this.

“This book doesn’t just advocate for tinkering or making because it’s fun, although that would be sufficient. The central thesis is that children should engage in tinkering and making because they are powerful ways to learn.”

One of the greatest honors of my life was having our book reviewed by legendary educator and author of 40+ classic books, Herb Kohl, who wrote the following.

“Invent to Learn is a persuasive, powerful, and useful reconceptualization of progressive education for digital times.” (full review)

So, that’s the secret. Invent to Learn: Making, Tinkering, and Engineering in the Classroom is really about making the world a better place for kids by helping educators construct a joyous, purposeful, creative, and empowering vision of education that prepares young people to triumph in an uncertain future.

I sure hope that y0u will read our new book and share this exciting news with your colleagues! 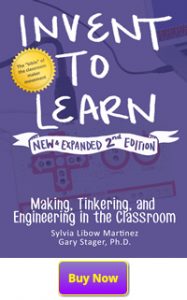