Many of you know that my doctoral research was based on work with Seymour Papert creating a multi-age, technology rich, constructionist learning environment for severely at-risk learners inside Maine’s troubled prison for teenagers. I worked for three years (1999-2002) on that project and learned a great deal about learning, teaching, school reform and the fragility of childhood from that experience.

Kids in the Constructionist Learning Laboratory were free to work on personally meaningful projects, regardless of what they were, as long as they were “doing something.” They had five hours of uninterrupted time each day for project development and we were freed from all curriculum and assessment requirements by the Governor and legislature in order to truly reform the system and reacquaint damaged students with their sense of power as learners.

Any and all volunteers who could generate student interest in a project were welcome in our classroom. I often felt as if we were on Gilligan’s Island since we had a constant stream of visitors and volunteers coming and going, despite working within a prison.

Blunt Youth Radio volunteers visited twice a week to work with kids on radio projects. This gave some kids a tremendous voice – literally and figuratively. 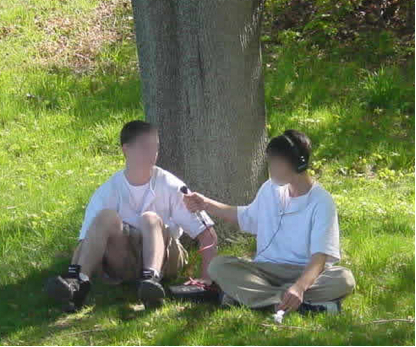 Joey really took to radio production and his program, Joey Interviews a Cutter, in which he interviews a peer about self-mutilation is brutally candid and won Joey a national radio award. I was reminded of this moving piece by Scott McLeod’s recent post about cutting (self harm).

After my work in Maine ended, my partner came running into the house screaming that one of my “prison kids” was just on This American Life. I refused to believe it! Surely, there was no way that something from “The LEGO Lab” (as the kids called our classroom) could have made it to the best storytelling program on radio. I checked the web site and sure enough, Joey’s piece of Mike Wallace-style investigative journalism, “Who Peed in the Pudding?” was played on Ira Glass’ show from coast-to-coast. You MUST listen to this short piece to be reminded of what kids, all kids, are capable of and to hear Joey remain calm during a stressful situation when all of the adults around him behave badly. Hilarity ensues!

While looking for Joey’s two radio programs, I found one that I never heard before. Joey’s Phone Call Home is just what it sounds like. An incarcerated teenager called home (from our classroom – probably in violation of 100 rules) and recorded the conversation. It is the banality of the conversation that reduced me to tears. All stereotypes of troubled kids and their “whacked-out” parents fade away when you listen to the heart-wrenching, but completely casual exchange between Joey, his mother and his little sister. It’s unbelievably poignant.

While I worked in the teen prison, my own kids were around the same age as the kids I taught. I was immediately struck by how similar my kids were to those with such traumatic lives and terrible odds stacked against them. The experience was humbling and moving. I learned more from the kids in Maine than I can ever possibly express.

During the three years of our project Joey and two of his brothers were our students. Yup, three brothers were all incarcerated within three years. I wonder what has become of the little sister you hear on the recording?

My colleague John Stetson once remarked, “Joey’s family goes to jail for the same reason the Bush family went to Yale. It’s their legacy.”

Joey, I hope you and your family are doing well. Your voice haunts me still.