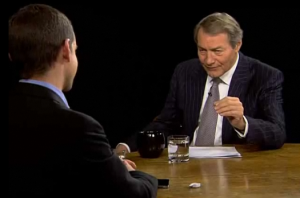 Last evening, Charlie Rose interviewed Jack Dorsey, Chairman and one of the three co-founders of Twitter. Dorsey also spoke about his revolutionary new company, Square. I highly recommend you take the time to watch the interview linked below.

Many of you know that I have been teaching children to program since I was a teenager myself. Learning to program at around the age of 12 made me feel intellectually powerful and creative in profound ways. It wasn’t until I learned to compose and arrange music a few years later where I ever experienced similar life inside my brain. Being able to solve problems in more than one way and make something out of nothing but ideas was personally transformative.

My work in educational “technology” (really computing) has been driven by a desire to empower others and light a spark in the minds of children so they too could feel the exhileration that accompanies programming. I recently spent time teaching first graders to program on their personal laptops. I fight on against the anti-intellectualism of the culture, the shocking devaluation of computing by the edtech community and schools whose misguided priorities jam a kid’s day with less fruitful pursuits.

I’ve observed how programming has been relegated to quaint antiquity like butter churning and the edtech community shifted its focus away from empowering smart kids and towards smart furniture. Computer and the its active forms compute and computing have been stricken from the educational conversation; replaced by information and technology. The active has been traded for the passive.

Seymour Papert  said that there must have been a secret meeting (I’m guessing around 1988-1990) at which it was decided that we should deny children any working knowledge of the computers and related technologies so central to their lives. The Computing Teacher became Learning and Leading with Technology. Classroom Computer Learning became Technology and Learning, now Tech & Learning. (See how even the words become more diminutive?) ISTE dropped the C in its earlier title and the National Educational Computing Conference is gone too. Worst of all, we have gone from arguing over the best programming language to teach children to a generation of youngsters who have no agency whatsoever over the computer.

Everyone wants their child to make Bill Gates’ money, but they don’t want them to learn to cut code.

Programming has at best a mad-scientist patina painted on it by the popular culture, or at worst the misanthropic portrayal in The Social Network.

Despite it’s curricular invisibility, it’s impossible to argue that computer science has not had an enormous impact on every other field of endeavor or aspect of our lives.

The edtech community’s love affair with social networking has not made it easier for those of us advocating computer science experiences and S.T.E.M. for young people. I do not ascribe a sinister motive to any person or community. It’s just a reality that 1) the education community seems to have great difficulty thinking about two things at once 2) people enjoy talking to their friends and colleagues online 3) schooling is at least 90% focused on language arts 3) too many believe that education is about the transmission of and access to information 3) blogging and tweeting are simply easier than learning to program. New pedagogical strategies and teacher expertise are also required.

Not only that, but becoming a good programmer is like becoming an artist, musician, dancer or scientist with all of the effort, deliberate practice and investment of time we associate with those pursuits.

Back to the Jack Dorsey interview…

Did you notice that I said that being a good programmer is like being an artist or scientist? Whoa! Wait a minute! Hold on there! What would Dan Pink say?

In the worst book of the 21st Century, Dan Pink asks readers to suspend their disbelief and accept a premise that science and technology are not only the enemies of creativity, but American superiority. In his dumbbell theory of left brain vs. right brain we are urged to take a stand against the dominance of analytical thinking in favor of creativity – as if they are mortal enemies. Anyone who has ever engaged in serious acts of creativity or scientific inquiry, knows that the cognitive processes are indistinguishable. Merely declaring “Thinking is good” would make for a very short book.

The notion that the focus of schools has been lopsided towards science and mathematics is pure bullshit, but that doesn’t stop from Pink urging his readers to right the ship of education before Liechtenstein takes all of our jobs.

It is the creativity of engineers and scientists that makes the mass-customization of products and innovations, such as Twitter, possible.

Jack Dorsey’s interview is just specimen #397,214,862 disproving the claims of Pink and other phrenologists. Dorsey is the complete package – a good looking, well-spoken, thoughtful, rich (we LOVE those qualities) programmer (sound of breaks squealing) who has changed the world.

The first powerful idea is that computing (programming) requires and develops computational thinking. Computational thinking – the ability to approach complex problems from a variety of perspectives and express solutions formally through code and to engage in debugging processes when things don’t work as intended – should be a major part of every young person’s education.

The second powerful idea Dorsey addressed was elegance. Great artists are known for their embrace of elegance and stripping away of the superfluous. Elegance is mission critical for programmers and computer scientists. Once a programmer solves a particular problem, the artistic side requires them to make it more elegant and the engineer side requires greater efficiency. The “hacker ethic” challenges programmers to make their programs shorter or reduce the number of instructions. The limitations of memory and processor capacity also require such elegance when performing a task a nano-second faster can pay enormous dividends or mean the difference between success or failure.

Twitter succeeds because of such elegance being brought to the user experience as well as behind the curtain. There may be no better way for children to develop an eye for such elegance than by learning to program computers.

Towards the end of the interview, Charlie Rose asks Jack Dorsey to make a Pinkian choice in declaring his identity. Dorsey will have none of it.

What are you and your school doing to create more learners like Jack Dorsey?

There is a lot of other good stuff in the interview, including Dorsey’s refusal to talk about “devices” interchangeably or predict that “smart” phones will replace laptops, but you can watch for yourself.

NO! I Will Not Buy Your Damned School Supplies!