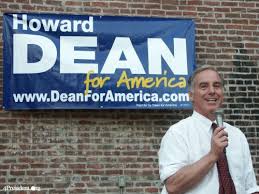 If Barack Obama happens to win the his party’s nomination and takes the White House it is the result of Howard Dean’s leadership as party chair and first candidate to to use the social aspects of the Web successfully for organizational purposes and to excite young voters.

In 2004, Howard Dean tapped into the anger over the war in Iraq and contempt of the Constitution displayed by the Bush Administration. He said that NCLB was a disaster. He was right on many of these issues and more. He revolutionized online fundraising and introduced the political world to blogs and Meetup.com.

After being destroyed by an open mic and a giddy mainstream media, Governor Dean became Chair of the Democratic National Committee. This represented the first time that the party leaned left and moved away from the Democratic Leadership wing of the party led so successfully by the Clintons.

When Dean became party chair, he promised to have the Democratic party compete in all 50 states for the first time in generations. I seem to remember that the old guard of the party thought that was a terrible idea. The party has gone on to build an effective grass-roots machine all across America.

Obama is now taking advantage of Howard Dean’s vision, contempt for the Clintons and brilliant organizational talents. I just wish Obama had Dean’s courage and willingness to address policy with specificity.

The Republican Lie on Healthcare