Earlier today, I enjoyed the great privilege of sharing the stage at the Australian Conference on Computers in Education with two of my favorite educators, Geoff Powell of St. Hilda’s School on the Gold Coast of Queensland and Steve Costa of Methodist Ladies’ College, Kew. The following is a tribute to Steve Costa, a truly gentle man with a wicked jump shot and the gratitude of the countless young people he has inspired for decades. 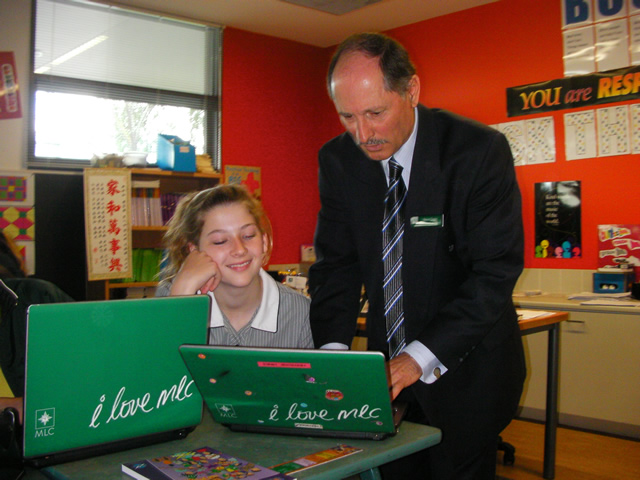 Stephen Costa, Deputy Head of the Methodist Ladies’ College Junior School may be the most important and overlooked educator in the world today. Steve emigrated to Australia from the United Stated in 1974 during a period in which the nation was recruiting young teachers. He fell in love with the woman he would marry and with Australia – in those days requiring him to surrender his U.S. citizenship. By 1981, Steve was teaching primary school girls at MLC to use computers. Around that time he read Seymour Papert’s, Mindstorms: Children, Computers and Powerful Ideas, and became inspired to teach his students to program in Logo.

A little known milestone in the history of educational computing is that Steve Costa began teaching an entire class of year five girls each with a personal laptop computer in 1989. He is Patient Zero when it comes to the use of laptops in education. If you are an educator anywhere in the world – from Manhattan to Melbourne to Mumbai teaching in a 1:1 setting or contemplating the eventuality of truly personal computing, you owe a debt of gratitude to Melbourne’s own, Mr. Costa.

It is not often that you have the privilege of knowing “the person who started it all,” but Steve Costa is not an artifact found in a museum, he continues to teach kids and his colleagues every day of the school year TWENTY-ONE YEARS after he embraced laptops as an integral part of the learning process. Steve Costa has been teaching with a laptop per child for more than a generation.

When I first met Steve in 1990, I was impressed by his energy, curiosity, dazzling teaching skills, calm demeanor and love of children. He was always willing to “have a go” and try any crazy idea I might throw at him and “his girls.” He has been invaluable to me as a colleague who could inject a dose of classroom reality into a scenario without ever using such current “reality” as an excuse for not trying to do better – to push the envelope. Steve is unafraid to learn alongside students allowing them to lean about learning by his example. Anytime you want someone smart for a panel discussion or extremely competent in a workshop setting, Steve tops my list.

Countless, perhaps thousands of educators have visited Steve’s classroom over the past twenty years, become inspired and gone back to make their schools better. Steve Costa should be famous. He should be traveling the world hailed as the father of 1:1 computing. He should be running the national education system, but instead Steve Costa does the hardest, most important work of all. He teaches children every day.

David Loader gets much of the deserved credit for pioneering 1:1 computing in schools, but that effort at MLC would be a long-forgotten experiment if it were not part of the daily excellence displayed by Steve Costa. Steve Costa’s contribution to modern education and computers in education puts him on a par with Seymour Papert, Alan Kay and David Loader.

At an edtech conference such as ACEC, it is worth noting that unlike so many ICT professionals whose curriculum is technocentrically focused on the hot new toy or latest fad, Steve Costa still teaches children to program in Logo (MicroWorlds). He does so because it affords learners countless opportunities for self-expression, problem solving, debugging and to think about thinking. Too many educators succumb to peer pressure and abandon “hard fun” or sound educational practices as the spotlight shifts. Steve is not one of them. He continues to learn, grow and develop his own personal computing fluency while embracing new technologies that increase learning opportunities for young people. He is not only a master teacher, but a master learner as well – unafraid of technological advances that amplify human potential.

There is no honor sufficient for my friend Steve. One would think that a grateful nation engaged in a “digital education revolution” would put its original revolutionary, Steve Costa, on a postage stamp. They would do so if they loved their children (and their children’s teachers) half as much as Steve cares for the children in his care.

Steve Costa led a silent revolution that changed the world the year Milli Vanilli topped the charts and continues to lead every day. Since the education community tends to be short on memory, we need to learn from Steve Costa today and honor his contributions for many years to come.

Memo to ISTE: I realize that Steve’s proposal to share wisdom gained over 20 years of teaching in 1:1 environments was rejected for the NECC 2009 program. Perhaps that was an oversight. Isn’t it about time you featured Mr. Costa at your annual conference and in your publications?

Fair Dinkum Aussies, You Get to Vote Too!