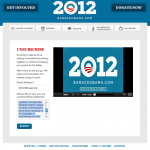 In the words of the great political philosopher, Popeye the Sailor Man, “That’s all I can stands, I can’t stands no more.” On the same day that the Obama Administration refused to stand for clean air by not even enforcing the clean air standards of the George W. Bush administration, I received an email from the campaign asking for my money and labor for his re-election.

Full disclosure:
I am a Liberal considerably far to the left of the President. In 2008, he was my 5th choice during the Democratic Primaries. However, once he defeated Senator Clinton, I became an enthusiastic Obama supporter. I donated money and traveled to Washinton D.C. to attend his Inauguration. Although I believed that he was politically naive with few coattails or allies in Washington, I was optimistic. That hope triumphed over what I knew about his hostility towards teacher unions as expressed in my September 2008 article, “First We Kill the Teacher Unions” and my horror at Arne Duncan’s nomination as Secretary of Education, “Obama Practices Social Promotion.”

Getting the President’s Attention
The President’s base is having a heck of a time having their concerns heard or respected by the Obama White House. The “punch a hippie strategy” might work as a political tactic, but not at the expense of increased asthma suffering by children or the survival of the American middle class.

My possibly inconsequential act of dissent was unsubscribing from the Obama political mailing list. Perhaps, the White House political team will take “the base” more seriously if a large number of political supporters sever their ties to the re-election campaign. So, I just unsubscribed and I urge others to do so as well, even if you plan to vote Obama as I do in November 2012.

I only had a small text field in which to express my reasons for unsubscribing. My comment is as follows:

The President’s weakness in negotiating with the GOP House, attack on public education, refusal to march with Wisconsin workers, capitulation on environmental regulation, continuation of questionable interrogation techniques, escalation in Afghanistan, support for soldiers of forture and refusal to fight for qualified nominees like Elizabeth Warren makes me quite unenthusiastic about either donating to his campaign or volunteering my time.