The worlds of education and psychology lost another giant January 28th. Dr. Seymour Sarason passed away at the

You can’t be taken seriously as a school reformer, transformer or agent of change without an understanding of Sarason’s work and having read some of the 40+ books he published. His work often asks more questions than it answers, reflecting the reality that humans and school systems are complex. Sarason taught us that serious thought must be given to notions of learning, leadership, governance and change if we are to do better as a society.

Seymour Sarason was not a phony baloney expert on school change or self-proclaimed educational leader, he was a serious scholar who left behind words to guide our thinking and our actions for decades to come.

Those experiences hammered home the importance of the role that social context plays in realizing one’s potential.” (“Colleagues pay respects,” 2010)

Sarason taught at Yale for forty-five years and founded the Psycho-Educational Institute, a clinic developing new approaches to treating the psychological problems of children and adolescents. Sarason and his graduate students went into schools, day care centers and prisons to work with personnel in those facilities to create settings that minimized psychological and learning pathologies. He came to believe that institutions intended to help individuals could do more harm than good, while consistently being reminded of human potential when an individual finds herself in the right environment. This work led Dr. Sarason to be credited as the founder of the field of community psychology.

This was the basis for his critical work on learning, educational institutions and school reform. Andy Hargreaves of Boston College says about Sarason, “He was one of the very first people to write in an explicit way about educational reform and the culture of the school from the perspective of the people who experience the change — teachers and students.” (Grimes, 2010)

Sarason coined a phrase, “productive contexts for learning,” that shapes much of my work. Despite his education as a clinical psychologist, Sarason weighed-in on complex political issues surrounding public education, the change process and even charter schools.

His optimism regarding each human’s potential to create, learn and grow was tempered by his understanding of how the institutions we find ourselves in can inhibit our progress.

I met Sarason a decade or so ago at the American Association of School Administrators Conference in San Diego. I attended the conference so I could hear him speak. I remember the setting vividly. Sarason spoke in a cavernous room with more than 500 chairs and a handful of people in attendance. I suppose the thousands of school superintendents attending the conference were investigating the “vending machine solution” or playing golf. Sarason was brilliant and very kind during the brief conversation we had about his current interest in race and economic deprivation.

When we met, Sarason had just published his first of two books on charter schools, Charter Schools: Another Flawed Educational Reform? (1998) A decade before charter schools would enter the public consciousness, Dr. Sarason was asking us to think more deeply about such changes in public school governance. In 2002, his second book on the subject, Questions You Should Ask About Charter Schools and Vouchers, was published.

In 1990, Sarason published The Predictable Failure of School Reform: Can We Change Course Before It’s Too Late? 1990! The first part of the book’s title predicted failure, but the second part asked if we could change the result. Several of Sarason’s book titles ended in question marks as a way of asking us to decide if we were up to the challenge of doing the right thing. Sarason also published, Revisiting “the Culture of the School and the Problem of Change” (1996) and Educational Reform: A Self-Scrutinizing Memoir (2002) in which he reflects on the evolution of his thinking over the decades of writing about school reform.

Sure, at times Seymour Sarason could be quite the curmudgeon, but what separated him from other cranky critics of school reform, such as Larry Cuban, was Sarason’s faith that it is possible to build better classrooms, institutions and social systems. Like Seymour Papert, Sarason wasn’t just complaining, he knew that the potential existed for us to do better by the children in our care.

Teaching as a Performing Art (1999), The Case for Change: Rethinking the Preparation of Educators (1993) and Parental Involvement (1993) and the Political Principle: Why the Existing Governance Structure of Schools Should Be Abolished (1995) are also worthy of your attention.

For those looking for a “quick course” of Sarason, there is an anthology you can read – The Skeptical Visionary: A Seymour Sarason Educational Reader edited by Robert Fried (2002)

Dr. Sarason spent the past couple years of his life in an assisted living facility and had just finished a book designed to blow the lid off of elder care at the time of his death. Centers for Endings. The Coming Crisis in Caring for Aged People (2010), may be downloaded for personal use. Sarason wrote and published his first novel at the age of 86.

“He placed our work as teachers within a realistic context, reminding us of both how important it was, and, at the same time, how modest our contribution could be to the larger picture,” Meier said.

“To combine that humility with the insights needed to still influence individual children and colleagues, and being influenced by them is important enough. That skepticism and passion for the task rarely exists within the same person, and above all rarely among academics.” (“Colleagues pay respects,” 2010) 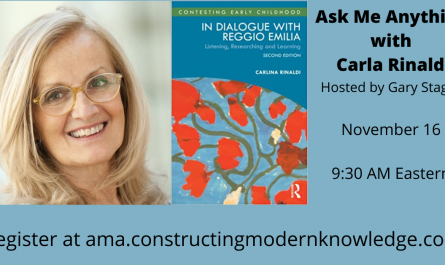