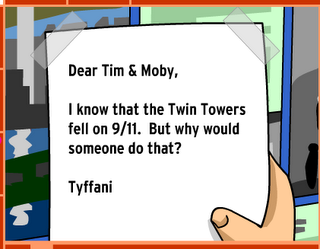 BrainPop gives me a headache.

I have long tried to make sense of BrainPop, a web-based library of short cartoons covering “hundreds of standards-aligned topics within science, social studies, english, math, arts and music, and technology; all supported with engaging movies and interactive assessment tools. Web-delivered and searchable by state standards,”

For quite some time I’ve wondered what a teacher would actually do with BrainPop or BrainPop Jr. Why would you show cartoons in the classroom? Who is the author of the content? How do you know that the information is unbiased, valid, factual or interesting? Shouldn’t “Internet Age,” learners engage with primary sources from a variety of experts with differing perspectives. How can complex issues and concepts from every discipline be reduced to a short cartoon? What do students do after watching one of the cartoons?

My ambivalence regarding BrainPop got more confusing this week after I received a press release announcing SEPTEMBER 11TH IN THE CLASSROOM: BRAINPOP RELEASES FREE MOVIE THAT HELPS ANSWER CHILDREN’S DIFFICULT QUESTIONS. BrainPop is giving away access to a 5:44 minute cartoon explaining the attacks of 9/11/2001. I’ll take the company at its word that it is not exploiting the national tragedy for cynical commercial reasons, but “help teachers communicate with students” about a “sensitive topic.” 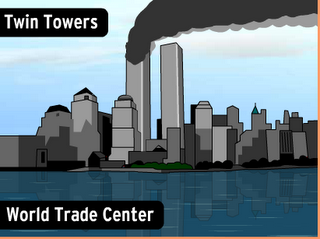 With much trepidation I hit the play button. The simple 2-D cartoon features Moby the BrainPop robot and his human friend telling the story of 9/11 in a chronological narrative about the attacks and a bit of background information on the terrorists. The cartoon sticks to the facts with little nuance and one politically-correct perspective. The content was not particularly objective even if you think that children should relive 9/11 even in cartoon form.

My viewing of BrainPop cartoons suggests that too many topics are addressed in too little time, with complex issues, stories or concepts reduced to the most trivial level of education – vocabulary development. The excessive volume of vocabulary introduced in the short 9/11 cartoon almost guarantees a trivial handling of complex and potentially controversial issues. Front-loading vocabulary without context, relevance, and most importantly, experience with the underlying ideas is one of the biggest pedagogical error made by educators. Knowing the names of types of angles without experience working with angles is not mathematics -it’s memorization. 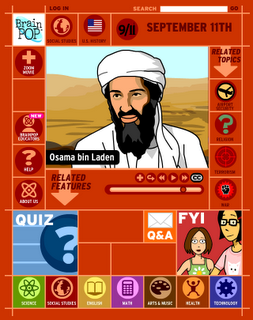 The 9/11 cartoon covers the chronology of the attacks, Al Quaeda, the Pentagon, terrorism, the Department of Defense, Osama Bin Laden, Islam, religious fundamentalism and more in just five minutes! In such scenarios, understanding is unlikely or purely accidental.

Fans of products like BrainPop justify its use by saying, “The kids love it!” By that peculiar standard, why not let the kids go home early or fill them with candy while in class? They love it compared to what? Given the choice between thinking, working or watching TV, most kids will choose the cartoon. The fact that the delivery of BrainPop cartoons is via the Web is inconsequential. This is TV cartoons without the artistry, storytelling or whimsy of great animation.

It is disingenuous to suggest that BrainPop cartoons are just tasty appetizers used to introduce a topic or inspire student interest. In order to justify the annual school subscription of $700-$1,400/year requires the company to make outlandish claims about state standards alignment and that the cartoons meet “the needs of multiple learning styles.” How many learning styles are supported by watching a cartoon?

Like most shallow easily pitched curriculum products, part of BrainPop’s appeal is based on its built-in assessment scheme.

That’s right! You guessed it! If you enjoyed the cartoon about the horrific tragedy of 9/11 you will love the multiple choice quiz that follows. 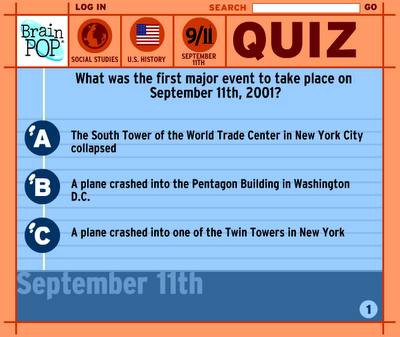 Turning 9/11 into a game of trivial pursuit in the name of standards alignment or assessment is most vulgar. Asking students to select the first World Trade Center that collapsed first is not a measure of understanding. It is a test of recall and nothing more.

Reducing a recent national nightmare to a cartoon may be in bad taste, but the multiple-choice test that follows reveals our real priorities.

Ready to Learn with Marvin Minsky?

8 thoughts on “9/11: The Cartoon and Multiple-choice Test”