The ability for anyone to publish on the Web is a good thing. Many voices can contribute to the marketplace of ideas when they may have otherwise remained unheard. However, the democratic promise of blogging is often illusory or counter-productive.

For several years I spent several nights and hundreds of dollars to attend a public affairs lecture series sponsored by the University of Judaism in Los Angeles. I saw Bill Clinton twice, Al Gore and a host of Israeli Prime Ministers speak (my least favorite sessions). The best evenings were spent when multiple experts shared the stage. Some of the most memorable evenings included:

Aside from the opportunity to hear experts and leaders speak, the format of these events made them quite special. Each speaker had 20 minutes to speak and then they sat down together for a conversation, often moderated by the President of the university who asked the sort of questions one might expect from a Talmudic scholar. When the university received complaints about the off-color language used by Bill Maher and Dennis Miller, a University spokesman quoted a disturbing Pew poll indicating that a majority of Americans thought it was fine for government to censor newspapers and affirmed the university’s commitment to presenting ideas in the authentic voice of the speaker.

As a keynote speaker, I take my obligations to entertain, inspire and inform quite seriously. That is why I decided a few years ago not to take questions at the end of my keynotes. I urge conferences to provide a space for me to engage in conversation with attendees for as long as they’re interested after the keynote, but in a separate venue. My experience led me to conclude that taking questions during the keynote results in one of the following undesirable results:

Any of these outcomes has a deleterious effect on the session and is the last impression left with audiences.

So, what do these two anecdotes have to do with social media?

Like a great lecture, play, film, concert or art exhibition, Meier’s recent essay provides enough “food-for-thought” to nourish you for a week – that is until you click the “comments” link on her blog post. The potshots, political manifestos and attacks leveled at the author and her ideas is nauseating and adds nothing whatsoever to the issue.

Education Week provides a great public service by publishing Bridging Differences. They would provide an even greater service by allowing the work to stand for itself and turn off comments. 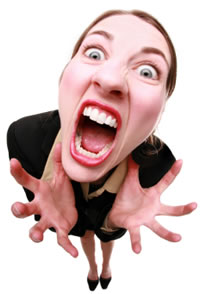 The lesson I learned during the fantastic lecture series discussed above is SHUT UP! Let the experts speak and converse without being interrupted by crackpots with an ax to grind. You are not their equal just because you bought a ticket or can use a Web browser. A handful of miscreants do not have the right to diminish everyone else’s experience.

Even if not disruptive, most blog commenters (IMHO) offer very little value to the “discussion” or consider the comments of others. Flame wars are much more likely than insight.

I first sensed that blogs were BS back in 2003 when I found myself sharing absolutely brilliant, earth-shattering, election-winning advice for Governor Howard Dean’s presidential campaign. With each passing day, I was increasingly disappointed to not receive a phone call from the candidate or have my suggestions result in dramatic strategy changes.

Then suddenly I realized why nobody was reading my profoundly erudite blog comments. I wasn’t reading any of the other thousand commenter’s brilliant comments. Nobody else was either.

If you wish to critique something someone else published on the Web, perhaps you should share your views on a personal blog and let the work of others stand for itself.

What do you think? You may flame me below. Riff-raff welcome.

Lesson of the Day

8 thoughts on “The Problem with Social Media”