During these dark days of American history in which politicians, media figures and billionaires of every persuasion are vilifying teachers and turning classrooms into joy-free Dickensian sweatshops concerned with little more than raising test scores on deeply flawed standardized tests, there is one candidate running for higher office who knows better and has been an on-the-record proponent of progressive education for decades.

In fact, when Governor Jerry Brown (now California Attorney General seeking re-election to a 3rd term as governor) nearly beat Bill Clinton for the 1992 Democratic presidential nomination, he made headlines for carrying a laptop with him everywhere. During his last term as governor of California in the 1980s, Brown was known to give away copies of Seymour Papert’s seminal book, Mindstorms: Computers, Children and Powerful Ideas. I’m told that the Governor kept a pile of copies in his office.

I met Governor Brown once and a profoundly candid and interesting conversation about teaching, learning and education policy with him. He’s a very smart guy, with great instincts, pure motives and a remarkable commitment to public service.

A few hours before Governor Brown debates his billionaire job and budget-slashing opponent, Meg Whitman, I decided to find the blurb “Jerry” wrote for the hardcover edition of Papert’s classic book, The Children’s Machine: Rethinking School in the Age of the Computer.

In my opinion, this is the most important book about learning now and in the future published over the past 25 years. It is a scandal that more educators have not read it. Jerry Brown has and wrote the stunning and prescient endorsement below.

“With wit and insight, Seymour Papert demolishes the hierarchical, right/wrong logic behind the rush to national testing and commend-and-control education. Instead, he shows why “little schools,” cybernetics and the creative use of computers can revolutionize how Americans learn. Give schooling, he tells us, back to the grass roots by devising ways for parents and kids to take ownership of their own learning.” 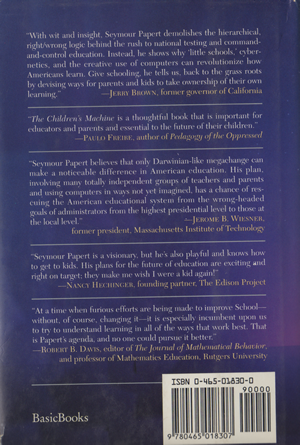 School is More than a Place – Laptops in Teacher Education (1997)

Less Us, More Them!