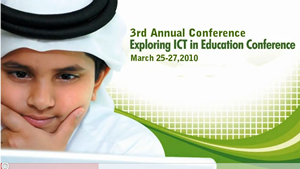 In March I had the great honor of being the keynote speaker at the 3rd ICTQatar ICT in Education national conference in Doha, Qatar. That was my 3rd trip to Qatar over the past couple of years.

Following my keynote, a nice young gentleman asked if he could interview me. I was happy to oblige and we found a vacant lounge area on the college campus where the conference was being held. That’s when the hijinx began.

First of all, the interviewer didn’t have a tripod. I convinced him that going handheld was a bad idea and helped him prop the camera on top of a camera bag. Then midway through the interview, one of his colleagues inexplicably walked into the lounge, headed to the light switches and cut our lights. After we objected, the guy spent a few minutes trying to turn the lights back on. After failing to do so, he shrugged and said, “Go somewhere else.” Eventually, the lights were turned on and a tripod emerged.

Despite these technical difficulties, I believe that the interview came out quite nicely and I was able to explore some issues in-depth. You might think of it as my “UnTED Talk.”

If you have 42 spare minutes, you might wish to watch this video. Pleae not be put-off my the incredibly unattractive poster image displayed in the static video player below.

Many thanks to ICTQatar for the terrific job of putting the video on YouTube.

Unanswered Questions for the NY Times about School Reopening

One thought on “My Interview from Qatar”