On November 14-16, 2007 I will be speaking at The Learning 2.0 Conference in Shanghai, China. Alan November, Jamie McKenzie, Will Richardson, Wesley Fryer, Chris Smith and Sheryl Nussbaum-Beach are also on the program.

The following is some information about me for people who might attend my presentations.

Computers not only offer opportunities for children to learn things that we have always wanted them to learn, perhaps with greater efficiency, efficacy or even comprehension, but their real power lies in providing productive contexts for learning things that were impossible to learn just a few years ago. Computers are the material with which learners may construct modern knowledge.

Over the past twenty-five years I’ve been fortunate that hard-work and intuition have allowed me to be at the right place at the right time.

I first learned to program in 1976 as a 7th grader and led computer clubs and after-school workshops throughout high school. Then it was off to Berklee College of Music where I hoped to develop as a jazz musician. In 1982, I created one of the first computer camp programs for kids anywhere. Within a year I was leading professional development for teachers and soon after that I was the Director of Professional Development for a consortium of 150 computer-using school districts. I led and organized hundreds of teacher workshops and chaired the first seven New Jersey Educational Computing Conferences.

In 1985, I attended my first two Logo conferences, at Pepperdine University in California and at MIT. I was blown away by the level of creativity, passion, intellect and embrace of newcomers I found within the thriving Logo community. It was around that time that I first met Dr. Seymour Papert and I began consulting with Logo Computer Systems. Soon after LEGO TC Logo was released in 1986, I became one of LEGO’s consultants and evangelists. I led hundreds of robotics workshops for teachers and helped design subsequent products. Around 1989-1990 I helped the Scarsdale, NY Public Schools develop a collaborative online creative environment for project-work built in LogoExpress, a version of Logo that allowed collaboration via dial-up modem. (My first modem was purchased in 1983 and I was a member of Compuserve and Applelink for years until Apple sent us a bill for a bazillion dollars.) It may be Web 2.0 to others, but it’s like Web 25 to me.

In 1990, a boyhood dream was realized when I traveled to Sydney, Australia in order to present a paper at the World Conference on Computers in Education (I’ve since presented papers at the past for WCCEs). Many of my Logo friends (Seymour Papert, Brian Silverman, Mitchell Resnick and Steve Ocko) were also in Sydney for WCCE. Alan Kay was the opening keynote and Papert closed the conference. This was very heady stuff for the kid from Jersey.

I met great Aussie educators who knew of my work via The Logo Exchange and other publications. I count many of these people as my best friends to this very day. A multi-day pre-conference workshop prior to WCCE featured students and teachers from two Australian schools where every student had a personal laptop computer. This was extraordinary since I was a computing professional and neither I nor any of my colleagues owned their own laptops. The “laptop schools” embraced the technology as a way of turning schooling inside out and the best vehicle for realizing the ideals of Papert and other progressive educators. A 12 year-old girl and I spent a couple of days building a working fax machine out of LEGO during the pre-conference. By the time WCCE began, my mind was spinning and my life was forever changed.

Three weeks later I was back in Australia leading professional development at the world’s first “laptop schools.” I spent countless months in such schools over the next several years and have made approximately 30 trips downunder. My work has taken me to countless schools in every state and territory. I’ve also keynoted countless conferences in “Oz” including being the keynote speaker following Seymour Papert and Maine Governor Angus King at a 2004 conference to launch Apple Australia’s school laptop initiatives. My 1:1 efforts are chronicled in Bob Johnstone’s history of educational computing, Never-mind the Laptops: Kids, Computers and the Transformation of Learning.

I began teaching at Pepperdine University’s Graduate School of Education and Psychology in 1993. My colleagues and I began teaching online around 1995. In 1997, I proposed offering an online masters degree program. The Online Master of Arts in Educational Technology degree program began a few months ago and has graduated nine classes of leaders since.

Seymour Papert, referred to by many as the “father of educational computing,” invited me to join him in creating a high-tech alternative learning environment inside Maine’s troubled prison for teens. That work was the subject of my Ph.D. research and documents Dr. Papert’s most recent institutional research projects. That work has inspired me to work in disadvantaged schools with the most severely at-risk students in order to create models of alternative learning environments and advance my motto, “Things need not be as they seem!” 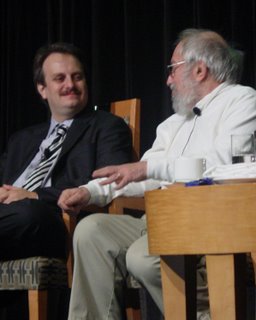 I’ve had the good fortune to be a collaborator in the MIT Media Lab Future of Learning Group. In that capacity, I’ve helped lead immersive one and two week-long professional development institutes for hundreds of Brazilian and Mexican educators. My work has taken me to six continents.

Since the late nineties, I have also been an education journalist and columnist. Close to 100 of my articles and papers may be found at http://www.stager.org.

In 2006, I launched The Pulse: Education’s Place for Debate at http://www.districtadministration.com/pulse

My personal blog is at http://www.stager.org/blog

An extremely effective use of YouTube to explain complex issues