Last December, New York Magazine published an article The Littlest Hustler: Portrait of a New York childhood, in the extreme. The article tells the story of “tween” Alex Goldberg who through grit, perseverance and force of personality views the world as his kingdom. I’ve thought about this terrific article over the past six months and my graduate students debated it.

Alex’s adventure ended hours later, at Nobu, where the pool crowd had migrated to feast on junket sushi. He had been chatting up Venus and Serena Williams at a nearby table, and mugging for cameras with a cigar hanging from his lips while eating a bowl of ice cream. Then the faces at his table went blank. Alex looked up and saw what they saw. His mother. 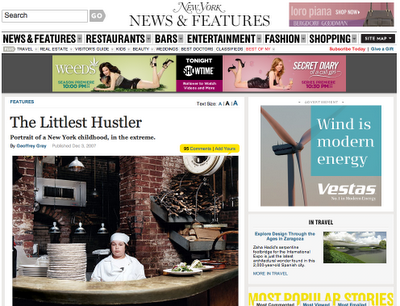 But Alex isn’t like other boys his age. He’s had free rein over the streets of Nolita since before he can remember, and he quickly learned the rules of that playground, turning his relationships with the neighborhood’s shop owners into access to free gourmet meals and designer clothes and trendy sneakers, then turning those freebies into even better stuff (like courtside Knicks tickets), and leveraging those perks into even more valuable things, like connections to athletes, rappers, nightclub owners, and so on.

This article is a reminder that long before Web 2.0 there were kids kids who were competent, clever, resourceful, responsible and eager to learn.

I wish I was as cool as Alex! I love that kid!

What do you think?

Apparently This Group of Tech Execs Has a Crystal Ball

2 thoughts on “I Love this Article!”