For kids of all ages:

George’s Secret Key to the Universe

by Stephen Hawking and Lucy Hawking (Simon & Schuster Children’s Publishing, 2007) Curious George’s author, H.A. Rey, was an amateur astronomer and friend of Albert Einstein. Now Stephen (this generation’s Einstein) and Lucy Hawking have accepted this generation’s challenge of explaining the universe to kids. If you haven’t been able to finish A Brief History of Time, this book, written for children ages 9-12, might help.

by Dr. Seuss (Picture Lions, 2001) This book was published posthumously and completed by Jack Prelutsky and Lane Smith. In addition to being a fabulous ( and timely) fable about the dangers of reducing education to test prep, the second half of the book is an exploration of Dr. Seuss’ creative process and a behind-the-scenes look at how the book was created.

The Number Devil: A Mathematical Adventure

by Hans Magnus Enzensberger, Rotraut Susanne Berner, and Michael Henry Heim (Owl Books,2000) Imagine a whimsical novel, plus math, and you get the picture of this book, which can be enjoyed by readers of all ages.

Blogs, Wikis, Podcasts, and Other Powerful Web Tools for Classrooms

by Will Richardson (Corwin Press, 2006) District Administration columnist Richardson explains the emerging technologies of blogging, podcasting, wikis, social networking and other innovations based on RSS.

The Children’s Machine: Rethinking School in the Age of the Computer

by Seymour Papert (Basic Books, 1994) The "father of educational computing" provokes us to think hard about the incredible potential to construct knowledge using computers.

Never Mind the Laptops: Kids, Computers, and the Transformation of Learning

by Bob Johnstone (iUniverse, 2003) A fascinating history of educational computing from WWII through the laptop revolution of the early 1990s.

MySpace Unraveled: What it is and how to use it safely

by Larry Magid and Anne Collier

(Peachpit Press, 2006) takes the incredibly novel position of suggesting that you know what you’re talking about before setting policy at home or in school. The book teaches adults how to use MySpace.com so that they may more rationally discuss social networking with children.

Internet & Computer Ethics for Kids: (and Parents & Teachers Who Haven’t Got a Clue.)

by Winn Schwartau, D. L. Busch (Illustrator) (Interpact Press, 2001) This terrific book should be read
by every parent, educator and teen.

Painting Chinese: A Lifelong Teacher Gains the Wisdom of Youth

by Herbert Kohl (Bloomsbury, 2007) Herb Kohl’s poetic meditation on life, art, teaching and learning is a gift that keeps on giving.

The Book of Learning and Forgetting

by Frank Smith (Teachers College Press, 1998) Smith may have written the most beautiful and thoughtful book about learning in the past decade.

Come on, People: On the Path from Victims to Victors

Unconditional Parenting: Moving from Rewards and Punishments to Love and Reason

by Frank Smith (Teachers College Press, 2007) This book poses the countless questions educators and parents have about reading, and answers them succinctly and in plain English.

by Dennis Littky and Samantha Grabelle (ASCD, 2004) Now on his fourth decade of successful school reform, Littky demonstrates how it is possible to create successful schools for the 21st century with innovations that are replicable.

by Carolyn Edwards, Lella Gandini, and George Forman (Ablex Publishing, 1998) American educators of all grades can learn from the municipal preschools of Reggio Emilia, Italy. This book explains their educational ideas better than any book.

In Schools We Trust: Creating Communities of Learning in an Era of Testing and Standardization

by Deborah Meier (Beacon Press, 2003) A fantastic book about creating learning communities within the four walls of the school and beyond by a Macarthur Genius

Teaching in these times:

Letters to a Young Teacher

by Jonathan Kozol (Crown, 2007) For more than 40 years, Kozol has given voice to the voiceless children in our cities. In his latest book, he uses the literary device of writing to a new teacher in Boston as a vehicle for exploring issues of pedagogy, politics, social justice and the joy of teaching.

Stupidity and Tears: Teaching and Learning in Troubled Times

by Herbert Kohl (New Press, 2005) A terrific collection of essays by the legendary educator and author.

Tested: One American School Struggles to Make the Grade

by Linda Perlstein (Henry Holt, 2007) Perlstein, a celebrated journalist, chronicles the story of a school that raised test scores dramatically by exploring the sacrifices made and whether continued progress is possible.

The Children in Room E4: American Education on Trial

by Susan Eaton (Algonquin Books, 2007) Eaton writes an in-depth analysis of the crises plaguing urban education through the story of one school in Hartford, Conn., over a period of 18 months.

The Game of School: Why We All Play It, How It Hurts Kids, and What It Will Take to Change It

by Robert Fried (Jossey-Bass, 2005) Fried offers thoughtful critiques on the state of public education and what we might do to improve matters.

Letters to the Next President: What We Can Do about the Real Crisis in Public Education (2008 Election)

by Carl Glickman (Teacher’s College Press, 2007) This collection of essays by leading educators and citizens offers unsolicited advice about education policy for our next president of the United States.

Selling the Dream : How to Promote Your Product, Company, or Ideas-And Make a Difference-Using Everyday Evangelism

by Guy Kawasaki (Collins, 1992) Kawasaki has inspired countless readers to gather and sustain support for their products and innovations.

Slack: Getting Past Burnout, Busywork, and the Myth of Total Efficiency

by Tom DeMarco (Broadway, 2002) A management expert, DeMarco makes a compelling case for granting employees some much needed time and space.

by David Loader (Routledge, 1997) Loader, one of the world’s boldest and most accomplished principals, lets readers inside his head and heart as he does his job.

Predict education’s future by reading about the past:

by Bertha von Marenholtz-Bulow (New Press, 2007) Read about the inventor of kindergarten, his radical ideas from a book originally published in 1894 and the fascinating story of how his ideas came to America.

The Public School and the Private Vision: A Search for America in Education and Literature (Classics in Progressive Education)

From Amazon.com – "Maxine Greene, one of the leading educational philosophers of the past fifty years, remains "an idol to thousands of educators," according to the New York Times. In The Public School and the Private Vision, first published in 1965 but out of print for many years, Greene traces the complex interplay of literature and public education from the 1830s to the 1960s—and now, in a new preface, to the present. With rare eloquence she affirms the values that lie at the root of public education and makes an impassioned call for decency in difficult times, once again a key theme in education circles. A new foreword by Herbert Kohl shows how the work resonates for contemporary teachers, students, and parents."

From Amazon.com – Angelo Patri’s eloquent 1917 chronicle of multicultural education in the inner city remains as relevant today as it was ninety years ago. Long out of print, A Schoolmaster of the Great City illustrates Patri’s commitment as a long-time principal at a New York public school to integrating all backgrounds into the classroom and to nurturing a community that extends beyond the school yard. The New York Times Book Review called it "an inspiring and an aspiring vision, an ideal of a force that would be a greater power in molding and Americanizing and democratizing American life than it would be possible to find in all other agencies together." 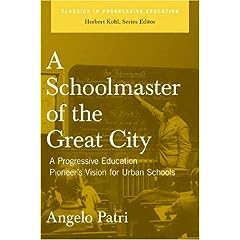 The Progressive Education Movement: Is It Still a Factor in Today’s School?

by William Hayes (Rowman & Littlefield Education, 2006) 3/4 of this textbook is a terrific history of progressive educators and its unsung heroes. The chapters on the modern era are of less value. 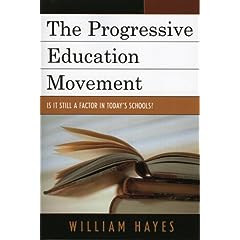 Op-Ed Claims Obama to have Exploited the "Race Card"