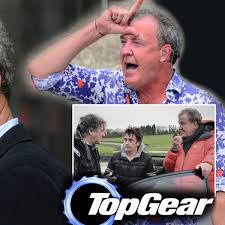 Over the past six months I’ve discovered the BBC television phenomena, Top Gear. I first heard about it when Jay Leno publicly criticized NBC‘s desire to produce an American version. Top Gear is hosted by three blokes who love cars, build insane contraptions, challenge one another to drive across the English Channel and tease one another mercilessly.

Top Gear is an enormous international hit with its own magazine, children’s books, DVDs and international editions, such as Top Gear Australia.

I’ve watched a couple of dozen episodes of Top Gear and have my DVR programmed to record new ones, not because I love cars or am even interested in them. I hate cars and would be pleased to never drive again. I watch the show for the hijinks, witty repartee between the hosts and because it is fantastic observing expertise.

The primary host of Top Gear, Jeremy Clarkson, is also a columnist for England’s The Sunday Times and The Sun. Clarkson’s co-hosts, Richard Hammon and James May also write entertaining columns for British newspapers.

During a recent trip to Australia, I thumbed through Clarkson’s most recent anthology of columns and found a stunning piece of writing about education, Schools are Trying to Break Children.

All of us wrap up our children when it’s cold. We put them on booster seats in the car and make them wear helmets when they’re on a bicycle. We strive constantly to keep them out of harm’s way, and then we send them off to school so they can be tortured and killed.

Apparently, schools the world over are a lot more similar than the international comparison wielding politicians would like us to believe.

Read Jay Leno’s review of and affection for Top Gear.