I am thrilled to offer conferences, professional learning centers and school districts a unique keynote presentation featuring HyperStudio inventor, raconteur and fellow bricoleur Roger Wagner and myself, Gary Stager. The idea for the session came from a spontaneous collision between Roger and I when we bumped into each other on the ISTE Exhibit Hall floor as the event was being broken down. While dodging forklifts, Roger and I showed each other fantastic stuff we made or discovered on our laptops and iPads, showed photos on our iPhones, recommended books that the other person MUST READ IMMEDIATELY and cracked each other up repeatedly. We were so inspired, amused and entertained that we decided to not only do it again, but to do so with an audience. 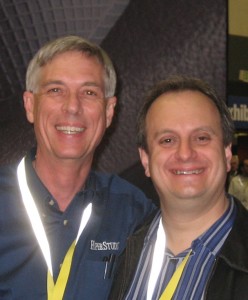 Eavesdrop as two edtech pioneers and old friends regale each other with hilarious and profound tales of computing, magic, chemistry, history and suspended adolescence. Each mischief maker will have their laptop connected to a giant screen so they may spontaneously share interesting props, tell stories and engage in multimedia mischeif-making. Be as amazed, inspired and entertained as Roger and Gary are whenever they collide. Hilarity will ensue!

When a Young Newspaper Reporter Asks Questions, Why not Turn it into a Blog Post?

The Greatest Congressional Hearing Ever?