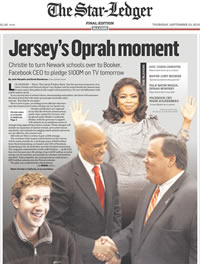 Regarding the Zuckerberg donation to the Newark Public Schools…

I am not hopeful at all. I am concerned. What makes you think that Christie hated public education and teachers yesterday, but not today?

Will the funds be used to supplement or supplant local school funding? In other words, will Christie steal $100,000,000 from Newark’s budget as soon as the check clears?
This is a hostile takeover of another urban school district and a surrender of democracy to mayoral control. Neither Cory Booker or Chris Christie have a clue how to end the poverty and terrible infrastructure deficits in Newark, let alone run a school system. Until, quite recently (kudos to Booker), Newark didn’t have a supermarket, movie theatre or bowling alley. It was a dead city.

How high do you expect student achievement to be in a once-majestic city with intergenerational poverty? I have said it before and I will say it again. I have worked in schools all over the world (on 6 continents) and have never come across more genuinely committed, hard-working or generous educators as those who work in the Newark, NJ Public Schools.

I’ve offered Cory Booker my assistance (via Twitter) many times. He’s never had the courtesy to respond.

The teacher-bashing, charter school takeovers and endless standardized testing is sure to follow turn this gift into a weapon against common sense and the children of Newark.

Zuckerberg’s generosity is laudable, but the money won’t help when marshall law/mayoral control is declared, the community is pushed aside and teachers are demonized.

Food for Thought on Election Day?

8 thoughts on “Oprah shouts, “You Get a School District!””