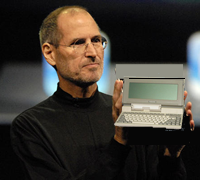 Summer 2010 marked the 20th anniversary of my work leading professional development in schools where every student has a personal laptop computer. One of the world’s first laptop schools was Methodist Ladies College (MLC) in Melbourne, Australia. The other was a long forgotten public school, the Coombabah State Primary School. The MLC story has been told in Bob Johnstone’s book, Never Mind the Laptops: Kids, Computers and the Transformation of Learning, as well as elsewhere.

Back in 1990, when I began working in 1:1 schools, we had Toshiba T1000 laptops with monochrome displays, no hard drive and 512K of RAM. Brilliant work was done by children fortunate enough to have their own personal laptop at a time few adults could claim likewise. Despite my misgivings about their limits in education, an iPad has a great deal more power than what we used 20 years ago.

I just returned to Melbourne Australia for the third time as a Visiting Scholar at Trinity College, The University of Melbourne.

I recently spent some time helping Foundation Studies educators explore how iPads may be used to challenge some of the conventional pedagogies of an educational approach based on teacher-centered practices and skill development. Foundation Studies prepares overseas students for university admissions. The ubiquity of an iPad per student affords opportunities to re-examine the nature of teaching and learning in more authentic, constructive and open ways.

The goal is always to create productive contexts for learning based on my mantra, “Less Us, More Them.”

While I typically do not recommend iPads as the only computer provided for K-12 students, Trinity College’s Foundation Studies Department has already decided to give them to young-adult students.

Here is the article that appeared on the Trinity College web site.

Gary Stager loves technology. His work in the use of computers and education has led him to visit Trinity in 2009 and again in 2010. Currently he is one of Trinity’s visiting scholars and recently held a staff conference regarding the TCFS Step Forward iPad program.

“It’s really exciting to be working with my colleagues here at Trinity Foundation Studies department to look at how the iPad can not only help them teach what they’ve always wanted to teach with greater efficiency…but how it creates opportunities for teachers and students to learn together in ways that were impossible otherwise.” says Gary.

Gary spoke to various Foundation Studies teachers and other staff regarding technology in education and ways in which they could utilise the medium to it’s maximum capabilities.

The Parental Veto of Curriculum (2007)

Matt Damon Can’t Save Us!