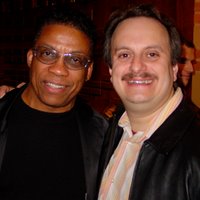 I’ve only met him a few times and did say, “Hi,” in passing at the recent MacWorld Expo, but few people have provided my life with more beauty than musician extraordinaire, Herbie Hancock. Tonight, the recording industry came to its senses and named his album, River: The Joni Letters

, Album of the Year! Although this album is hardly Hancock’s best or most important, it is quite heartening to see an actual recording artist honored by the Recording Academy.

, signed by all of the musicians on the record. It took me a couple of years, but George Coleman, Freddie Hubbard, Ron Carter, the late Tony Wiliams and Herbie autographed my album.

I’ve been privileged to see/hear Herbie Hancock perform live in a variety of settings, including at the Village Vanguard with Ron Carter and Tony Williams, with his own band and most recently with Wayne Shorter, Ron Carter, and Billy Cobham at Ron Carter’s 70th birthday celebration at Carnegie Hall. Every cell in my body comes alive and wants to scream with joy when Herbie plays the piano.

Hancock is arguably the greatest living jazz pianist and one of the most influential in history. He is also an electronic music pioneer, Macintosh aficionado and brilliant composer. Check out his solo album, The Piano

, and have your mind blown by his originality and artistry. 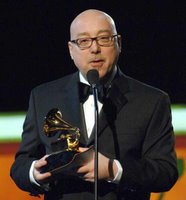 I missed this year’s Grammy Awards telecast while I spent 12 hours flying from Los Angeles to Boston. Watching tonight’s 50th Grammy Awards would have been quite a let down from last year’s 49th Annual Grammy Awards since I not only got to attend last year’s ceremonies and after-party, but my friend, Brian Lynch won the Grammy for Best Latin Jazz Album of the Year for his fantastic recording, The Brian Lynch/Eddie Palmieri Project: Simpatico

. I was a new media producer for the project and had the great privilege of attending rehearsals, recording sessions, the record launch in NY and was thanked from the stage of the Grammys! I’ll never forget how loudly I screamed when Brian’s name was announced as the winner. I cannot imagine a greater thrill. I was so proud of Brian and all of the great artists who contributed to the album.

Brian, Sylvia & I at the 49th Grammy Awards (captured on a smuggled in phone camera)

A few months later, I accepted the Jazz Journalist Association’s award for “Best Latin Jazz Album of the Year,” on behalf of Brian and Eddie Palmieri who were touring Europe at the time.

The Article I Wish I had Written – 1