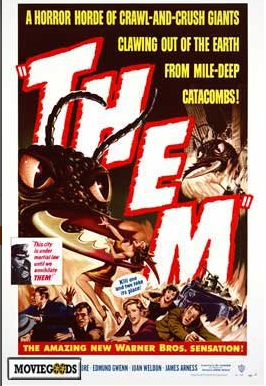 The following is a response to David Warlick’s blog, Expanding the Definitions of Literature… Are We? Should We?

Of course, new media should be respected, enjoyed, analyzed and criticized. It’s also worth acknowledging the remarkable prophylactic effect school has on the reading habits of many children.

I know of many places, including Australia, where children are offered rigorous “Film as Text” courses where moving stories are treated as forms of literature. However, even in such courses, the canon selected is subject to debate and criticism, as it is in paper-based literature courses. With a great teacher, a student may learn a lot about analysis and criticism even if the texts might be considered dubious.

The only time I received less than an A or B n high school English was for a quarterly-elective entitled, “Science Fiction.” During class we watched “The Blob,” “Sleeper,” “Fahrenheit 451,” “Brave New World,” “2001,” “Them” and other classics of the genre.

The course was enormously popular among seniors who used to get ready for the “freaky” films over lunch-hour at the local Polynesian restaurant.

I did not imbibe, but did earn a D for the course because in addition to watching movies recorded by the teacher on an early reel-to-reel video deck, you were supposed to read four or five high-quality science fiction novels at home and pass a test on them. I “forgot” that requirement.

I also earned a D in a Rutgers University history course entitled, “History and Film.” I hoped that the course was about the history OF film. My bad! Classes consisted of the professor showing a collection of films starring Ursula Andress. These films were chosen less for their historical significance than to satisfy a professorial fetish. In betwen screenings, the professor would pace the length of the classroom while screaming, “…and the Prussians” so that students in the front row required rain gear. Then came the essay-based exams about Otto von Bismarck.

Who knew? I had been “studying” Ms. Andress.

Can’t we all just get along?
Instead of choosing X media to replace Y media, it is ALWAYS a good idea for knowledge to exist in multiple forms and for the literate person to choose the appropriate medium. Some films are great works of literature, while just like with books, some are not. There may be compromises required by adapting a novel into a screenplay and storytelling that is impossible via the printed word.

A current example – the “Catholic League” is boycotting the film, “The Golden Compass,” not because of what has been exorcised from the film, but because they don’t like what was said in the original book. The head of the organization’s outrage machine refuses to even see the film.

My students read books in which experts explore powerful ideas with a level of depth, breadth and passion unlikely to be matched on the web. They also read web-based articles, share their work online and reflect upon their learning experiences synchronously and asynchronously. Most importantly, my students are engaged in using computers to construct knowledge by immersing themselves in active experiences that are either greatly enhanced by the availability of a personal computer or impossible in its absence.

Why must one medium or technology win while the other loses? This question is especially relevant when the resulting change in pedagogical practice is likely to be imperceptible?

Piaget said, “To understand is to invent,” while Papert embellished this to say, “If you can make things with a computer, then you can make a lot more interesting things.” If you believe in project-based learning, computers make a greater range of projects possible.

I know that we like to talk about emerging technology, but this discussion is really focused on very little, ie… “How should I receive or transmit some content?” I’ve said it before and will say it again, learning is about a whole lot more than delivery or reception of information. Besides, 98% of these discussions are limited to language arts (perhaps with a bit of social studies) instruction.

The entire discussion of whether will kids read or watch or have standardized test answers surgically implanted in their lower intestine sheds little light on what educators should do right now to make schools more productive contexts for learning.

Who Says There is No Expertise in New Media?

3 thoughts on “Them! The technology that killed reading”