I took one of those wrongly ridiculed diversity courses while an undergraduate. If memory serves, the course was entitled, “Racism and Sexism in a Changing America.” We watched footage of the 1950s-70s struggle for Civil Rights, learned of Emmitt Till, James Meredith, Fannie Lou Hamer, Malcolm X, Stokely Carmichael, John Lewis, Freedom Summer and the Freedom Riders. We read Ann Moody’s Coming of Age in Mississippi and Gloria Steinem’s book, Outrageous Acts and Everyday Rebellions. We argued raw issues of racism and sexism in an environment of respect.

Since that deeply transformative educational experience I have read countless books about the Civil Rights movement. I’ve tried to learn about the unsung heroes of America’s struggle for justice, both the giants like Paul Robeson and W.E.B. Dubois and the foot soldiers in the movement.

I’ve watched my set of Eyes on the Prize countless times and have hung on every word of Tavis Smiley’s week of interviews with friends and associates of Dr. King.

I’ve had the honor of meeting Jesse Jackson, Cornell West, Al Sharpton, Julian Bond, Ruby Dee and Spike Lee. In 2006 I enjoyed the privilege of serving on a panel discussion with the organizer of Freedom Summer, Bob Moses, who now works on education issues as founder of the Algebra Project. My love affair with jazz and what its artists have contributed to America has grown stronger. My affection for Jonathan Kozol’s lifetime of work, inspired by the 1964 murder of Goodman, Schwerner & Chaney in Philadelphia, Mississippi makes his work even more resonant for me.

As I write this, I’m watching a C-Span interview with Congressman John Lewis, the first Chair of SNCC. He named Thomas Merton, Ghandi and Thoreau as three of his heroes. They would form a pretty good humanities education for any student. He spent as long as 40 days at a time in jail and was beaten twice during the 1960s. The courage and wisdom of these young men and women (almost all in their 20s) is humbling. Last night, one of King’s workers at the SCLC told Tavis Smiley of how King visited her church in Virginia while they were fighting to integrate the public library and invited parishioners to come to Atlanta to work with him in the citizenship education effort. Mrs. Cotton’s husband drove her to Atlanta and they remained separated from that day on. Countless freedom fighters such as these made the world better through their non-violent protest.

King’s attorney and friend, Clarence B. Jones is the gentleman who smuggled paper and pencil into the Birmingham jail so that Dr. King could write his revolutionary, Letter from a Birmingham Jail. He just told C-Span that he was hired right out of law school to defend King against tax evasion and perjury charges in Alabama. Do you know the extent to which the United States fought to destroy and discredit King?

Over the years I have made personal pilgrimages to the Ebenezer Baptist Church in Atlanta, Nelson Mandela’s prison cell on Robben Island, Little Rock’s Central High School, Ole Miss (Oxford, Mississippi) and the National Civil Rights Museum at the Lorraine Motel in Memphis. This week, I learned that Lorraine, the co-owner of the hotel had a heart attack when Dr. King was shot and she died three days later. Even a Nobel Laureate like Dr. King was forced to stay in segregated accommodation as late as 1968. 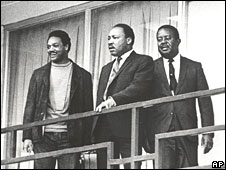 Today is the 40th Anniversary of Dr. King’s assassination at the Lorraine Motel, now the site of the deeply moving National Civil Rights Museum. It was at this hallowed place of remembrance that Senator John McCain had to apologize for his multiple votes against the King holiday and Hillary Clinton spoke of meeting Dr. King at the age of 14.

Senator Obama strains credulity when he suggested that he could honor King’s life and sacrifice better by campaigning in Indiana rather than attending April 4th’s commemorations in Memphis. The sad truth is that a large part of Obama’s appeal to White America is a professed hostility towards the militancy of the civil rights movement and the inference that our racial problems have largely become history, especially “in the hearts” of the young people his campaign celebrates. Obama seems to resent the “baby boomer” generation while he exalts “Generations X, Y & Z.”

King’s life, work and martyrdom was only partially concerned with ensuring that men like Obama could some day be elected President or head a major corporation. King fought for economic, social and legal justice and died marching for the rights and human dignity of sanitation workers. He fought against racism, economic disparity and militarism. It is the last two “evils” that rarely make our classroom discussions of Dr. King.

As our schools are more segregated than in 1954, the Supreme Court recently reversed Brown vs. Board of Education, our nation invaded Iraq and economic disparity is at an all-time high, King would have much to say. It is tragic that our nation is so hostile to King’s entire legacy, not just the happy talk about the “content of their character,” that Barack Obama needs to hide in Indiana while the rest of America’s attention is on Memphis.

You Know Him, You Love Him, You Can’t Live Without Him!

3 thoughts on “On this Tragic Anniversary, I Feel Sad for Senator Obama”